Amid recent debates about the U.S. military presence in Korea and the talk about base relocations and cost-sharing agreements, there is a small community of people living in a village just north of Seoul who have a relationship with the U.S. military that is like no other.

The place is Geolsan Village, and it is located on the grounds of Camp Casey, which is itself part of the Second Infantry Division of the U.S. Army in Dongducheon, about 64 kilometers (40 miles) north of Seoul. Deep within the base, which spans 3,500 acres, 61 houses occupied by 130 residents huddle together in close proximity in the mountains. 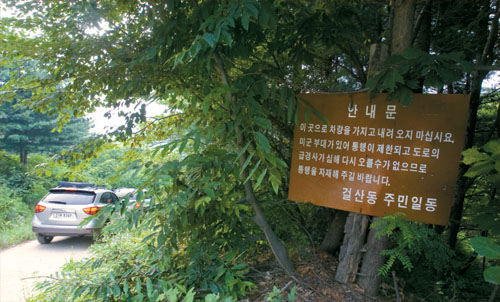 The villagers settled into the isolated area before the U.S. military arrived, but their lives have been dominated by its presence ever since. For them, life on the base is not always convenient, and the villagers have to abide by the rules the military sets, but they have adapted and even grown accustomed to the restrictions. Now, however, they are worried about the prospect of the base closing and how it will affect their community.

On a recent tour of the village for reporters led by Dongducheon City Council Chairman Hyeong Nam-seon and Donducheon City Government employee Kim Dong-hun, the group paused at the entrance to Camp Casey. There, a Korean national flag hangs next to the Stars and Stripes and a poster of a handshake, all of which remain as constant reminders of the 1950-53 Korean War, which ended with an armistice that brought an end to the hostilities. 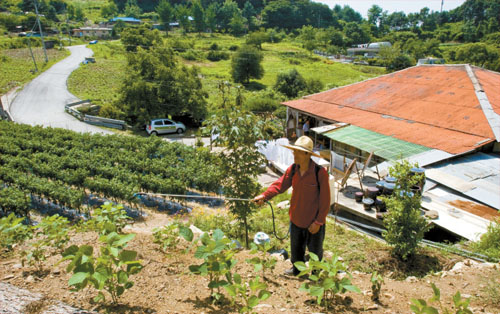 Kim Jeong-han, 60, a resident of Geolsan-dong works in his field.