Yeongam gears up for F1 debut

Yeongam gears up for F1 debut

A traditional Koran flavor is added to the design of the grandstand. Provided by South Jeolla Province

YEONGAM, South Jeolla - Korea, a country that takes pride in having hosted a range of global sporting events such as the World Cup, the Olympics and the Asian Games, is set to see yet another historic event debut a year from now - a Formula One Grand Prix.

The International Automobile Federation, the motorsport’s governing body, announced on Sept. 21 that one of the 19 races of the world’s biggest and most expensive motorsport championships will open on Oct. 17 next year in the scenic county of Yeongam on the southwest coast of the Korean Peninsula.

Although Korea is the world’s fifth-largest auto-making country, it will be the first time it will host the F1 Grand Prix. The neighboring countries of China, Tokyo, Singapore and Malaysia have already held such events in the past.

The confirmation of the 2010 calendar by the international governing body came five days after Korea’s National Assembly passed a bill providing a government subsidy for the event worth 88 billion won ($76 million), boosting a long-term project spearheaded since 2006 by the organizers, the provincial government of South Jeolla, where Yeongam is located, and a private firm called Korea Auto Valley Operation.

Under the initial contract with the FIA, the annual race will be held in Yeongam for a period of seven years. After that, an extension for five years could be granted, according to the organizers.

“South Jeolla is hosting the F1 Grand Prix as part of its plan to help turn the southwest coast [of Korea] into a region focused on tourism and leisure,” said Park Joon-yung, governor of the province, in a recent press conference. “I am sure F1 will not only contribute to the regional economy but also open a new chapter in Korea’s motor sports history.”

Despite a relatively low profile among international tourists, the coastal county of Yeongam, 320 kilometers (198 miles) south of Seoul, is known as a major producer of marine products, figs and rice.

Mokpo Station, its closest train station, is some three and a half hours away from Seoul by KTX; it takes 40 minutes to get to the Muan Airport near the county from Gimpo International Airport in western Seoul.

The trip by train could be further shortened if a temporary route solely for the event is developed, a subject now under discussion. Also, shuttle buses around major transportation spots will be operated during the championship period and a vast parking area will be built outside the circuit.

Although the county has no global hotel chains such as Hyatt, Hilton or W yet, the organizers plan to take full advantage of nearby golf resorts and tourist residences in the first year.

A village accommodating dozens of traditional Korean houses is set to be constructed by August 2011. And inquiries from overseas investors for hotels and other entertainment facilities have increased in recent weeks, according to Kim Jung-wan, a spokesman for the F1 Race Preparation & Planning Team in the provincial government.

“Tourists may go back and forth between Seoul, Gwangju, Busan or Jeju Island. For example, we may develop a program that links shopping in downtown Seoul and the Korea F1 Grand Prix,” he said.

Given 2010 is when the central government will launch a “Visit Korea” campaign to boost its tourism industry, the culture and foreign ministries and the Korea Tourism Organization are also expected to help promote the sports event.

Construction of the track circuit costing 240 billion won is currently in progress and the organizers say the overall facilities are set for completion by next June. The circuit to accommodate some 135,000 spectators is now over 55 percent complete as of early October.

Korea has two racing circuits at present - Yongin on the outskirts of Seoul and Taebaek in Gangwon - but neither meets international standards set by the Federation International Automobile.

One of the noteworthy characteristics of the Yeongam F1 circuit, which has been laid out by one of the world’s top circuit designers, Hermann Tilke, is the dual structure, organizers say. Ordinarily, there would be two separate F1-standard-sized circuits - a 3.06 kilometer track in the north that resembles the shape of a hat and the other in the south. During the F1 period, the two will be merged to create 5.62 kilometers, which will be the second-longest among all F1 tracks following the one in Monza, Italy, at 5.79 kilometers.

The hat-shaped track will be used for commercial purposes at other times, mostly to be leased for other motor-sporting events. 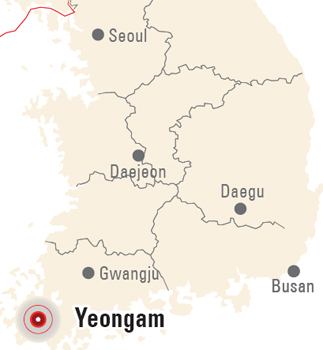 The 5.62-kilometer track will have a total of 18 curves in three stages. The first three curves within the first and last laps have a 1.25-kilometer-long straightaway where drivers can reach a maximum speed of over 320 kilometers per hour. A notable feature of the second stage - from 4 to 12 - is that its curves from 7 to 9 have been built to minimize brake applications. In stage three, drivers will be able to relish the ocean view.

Another special feature is the direction of the circuit, which will be counterclockwise. Since all other tracks, except for the Turkish and Brazilian ones, run clockwise, the Korean track poses a greater challenge to drivers used to driving in the other direction.

Many of the world’s leading automakers have participated in F1 championships - Mercedes-Benz, Renault, Ferrari, BMW and Toyota. Although BMW and Honda have decided to withdraw from the event next year because of the state of the global economy, other foreign auto-making powerhouses such as Volkswagen, Audi, Porsche and Nissan are reportedly looking into joining. In Korea, the Hyundai-Kia Motor Group, the top carmaker here, has yet to join the fray.