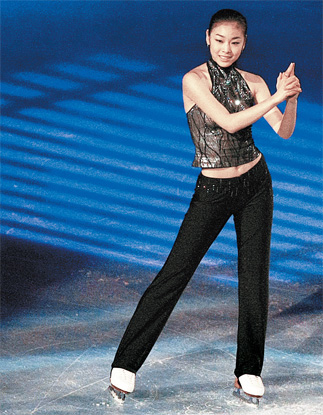 Kim Yu-na capped off her world record setting performance at the Trophee Eric Bompard in Paris, France with a crowd-pleasing performance in the Gala Exhibition early yesterday.

Coming off a record breaking performance in which she blew away her competition with a combined score of 210.03, Kim was flawless in the Gala Exhibition.

Kim performed her routine to the tracks “Don’t Stop the Music” and a James Bond theme medley, drawing huge cheers from the audience.

In summing up her performance in Paris, Kim seemed to hint at the possibility of another record breaking performance. At the season opening ISU Grand Prix of Figure Skating events, Kim skipped the triple flip jump altogether but still managed to earn a record setting score of 210.03.

“Many told me that I deserved the record-setting score at the World Championships but, to be honest, it was a miracle,” Kim said yesterday. “But despite making a mistake in my routine I earned a higher score this time. This led me to think that it would be possible to earn higher scores in the future.”

With her impressive performance in Paris, Kim reclaimed the top spot in the ISU world ranking. Kim had been ISU’s top-ranked skater after her record-setting performance at the World Championships in March. While Kim had slipped to second overall at the start of the new season due to ISU’s grading system, she retook the top spot. Carolina Kostner of Italy slipped to second and Mao Asada of Japan is currently ranked third in the world.

Kim left Paris for Toronto last night and will resume her training with her sights set on Skate America in Lake Placid, New York, set to be held from Nov. 12 to 15.

She will most likely compete in the Grand Prix Final in Tokyo in December before fully immersing herself in preparation for the Winter Games.

“Scores usually increase over the course of a season so I did not expect a score of over 200 at this event,” said Kim. “I’d be lying if I said I wasn’t feeling the pressure. However, it’s important to focus on executing my routine rather than on the final scores. I always hope to get a similar score in the next competition.”

While some fans are concerned about Kim peaking early in the season, she has been steadily increasing her score since last February.