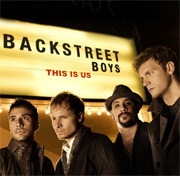 “Give it a rest,” I thought when I heard that the BSB were coming out with yet another album a whopping 16 years after their debut.

But after a few listens I dare say “This Is Us” is actually pretty good.

Despite their age, the Boys —most definitely men by this point— show a crack ability to tap into what’s cool. Taking a cue from their European peers’ club hits, the foursome (still sans original member Kevin Richardson) return to the glory of their dancehall
days. In their single “Straight Through My Heart,” the group pours on the beats and the techno — and tap into pop culture’s vampire mania in the video — to great effect.

Remorse somehow remains upbeat on “If I Knew Then,” which rocks a hot drum machine roll that would be expected on a Ne-Yo track, while the energetic “Masquerade” keeps
the album from sagging in the middle. The disc closes out with a bang with the help of Pitbull on “Helpless,” which is still how the Backstreet Boys make this grown-up teenybopper feel.


Backstreet Boys
“This Is Us”
Label: Jive
Genre: Pop