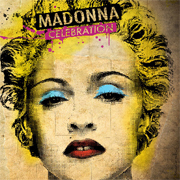 What a ride. Moving through all the tracks in Madonna’s new two-disc greatest hits album “Celebration” is like hopping into a time machine, allowing you to revisit parts of your life every step of the way.

Of course, many greatest hits albums have this effect. But none to this degree. Each of these songs were so iconic at the time they were released, you can’t help but tie memories to them.

Celebration, which comes out on Thursday, is different from previous greatest hits collections - “The Immaculate Collection” and “GHV2” - which included just her representative tracks from each decade. The new album includes all of her best works. The songs have been digitally remastered, giving them an enhanced sound and a slightly different beat. There is also a new track at the end of each CD. The upbeat songs do indeed complement her other tracks, but they sound dated, as if they should’ve been on her “Vogue” or “Like a Virgin” albums. Still, they harken back to the days when Madonna was unquestionably the world’s biggest pop diva. By Hannah Kim