Wild boars are a hog-sized problem

Wild boars are a hog-sized problem 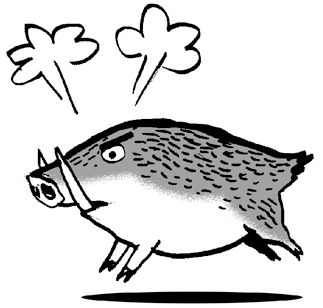 Naturally, the king lifted the ban there in order to prevent further damages from wild boars. In 1451, a similar appeal was submitted to the throne. The king gave an order to exterminate wild boars by dispatching officials of Saboksi, the royal office that managed horses, carriages, harnesses and cattle breeding for the king, to the hunting ground.

In January 1518 a strange incident occurred in which wild hogs dug up the grave of a queen. King Jungjong reacted sensitively to “nature’s warning,” because he thought it was not a simple accident, although it was done by wild hogs. He dispatched an official, who would preside over a Buddhist ritual at the queen’s tomb, to comfort the spirit of the deceased.

On Wednesday, a traffic accident occurred in which a huge wild boar, weighing over 200 kilograms (441 pounds), collided with a vehicle on the Seoul-Busan Expressway. Except for the fact that the wild boar was surprisingly big, there was nothing new about the accident. It was a long time ago that the damages to farming caused by herds of wild boar became a serious problem. Even wild hogs that ran wild in downtown Seoul were caught continuously in the past three to four years.

The problems of wild hogs caused by over-breeding and their extreme size are not limited to South Korea. Although it was not as large as that mammoth wild boar that attacked humans in this past summer’s film “Chaw,” there is the instance of a wild hog alleged to have weighed 450 kilograms shot in Alapaha, Georgia, U.S., in June 2004. Japanese local governments are also exploring ways to effectively prevent damage from wild hogs, such as paying farmers subsidies to install electric fences.

The uproar caused by wild hogs recorded in the Annals of the Joseon Dynasty was because the number of wild hogs multiplied rapidly due to a hunting ban, but the prevalence of wild hogs in the 21st century is due to the fact that humans have removed the beasts’ natural predators. Although the habitat of wild hogs is shrinking due to various development projects, their numbers have not decreased because their natural enemies, like tigers or wolves, are gone. Also, it appears that domestic boars are mixing with wild ones, creating even more wild boars in the forest.

In the end, there is no other alternative but to capture them. It seems not such a bad idea that humans play the role of predators before wild hogs become the source of a real disaster.