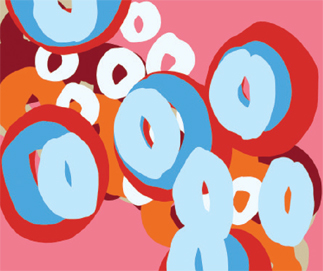 Large and bold loops, twists and squares make up the works of Swiss artist Markus Weggenmann, who mixes various shapes and compositions together.

At first sight, some of his paintings seem to depict different shapes floating in water. But the scenes seem to morph the more you look at them, drawing you in with interweaving motifs, daring applications of colors and unconventional compositions. It quickly becomes clear that these works are much more complicated than they seem.

Weggenmann’s pieces are now being shown for the first time in Korea at The Columns Gallery in Cheongdam-dong, southern Seoul. For the exhibition, titled “Frozen Desire,” a total of 14 panels are on display.

Made using industrial materials, the works embody both mechanical and human elements.

The artist’s hand is visible in the organic forms that fill the panels. However, the colors and smooth surface of the finished aluminum panels combine in a unique way. The pieces are shimmery, reflective and flashy. The use of automotive paint adds brilliance to some of the pieces, while others incorporate gloss and spray-paint - a Weggenmann trademark since 1999.

The artist starts his works by creating small drafts, mostly gouache drawings created in great quantities. After whittling them down to a select few, Weggenmann scans the chosen drafts into a computer and edits them digitally. The process includes straightening the outlines, changing colors and superimposing different forms until the images take the desired form.

He then uses an outside firm - a professional car varnishing company - to enlarge the works, which explains the secret behind their glossiness. Having decided on the format, Weggenmann then projects the designs onto aluminum panels coated with white primer.

Born in Singen, Germany, in 1953, Weggenmann was originally trained as an occupational therapist in Zurich. He changed his profession and embarked on his first major project as an artist in 1989. By 1992, when he began making his series of “striped paintings,” where the use of vibrant and bright colors took center stage.

Weggenmann has been working in Germany and Switzerland for over 15 years, perfecting the enigmatic and alluring style that has drawn viewers to his works.

His forms never have an illustrative function. What the artist creates are not abstract paintings, but, as he puts it, “an abstraction of painting.”

The process itself is crucial to Weggenmann, including the transformation that both he and the paintings go through.

The exhibition is being held at The Columns Gallery in Cheongdam-dong, southern Seoul, through Nov. 14. The gallery is open from 10 a.m. to 7 p.m. Monday to Friday and from 10 a.m. to 6 p.m. on Saturday.