A charming county stuck in time

A charming county stuck in time

With harvest season over, Namhae’s famous terraced rice paddies weren’t as magnificent during a recent visit as they often appear in magazines and books - though they still made for a pretty scene. Some sections of rice paddies contained buckwheat flowers - (as shown in this picture) - while others were being prepared for garlic-sowing season. By Kim Hyung-eun

NAMHAE, South Gyeongsang - Garlic, terraced rice paddies and a picturesque seaside road. These are just a few of the reasons that people from across Korea visit Namhae in South Gyeongsang.

I decided recently to see for myself what the area has to offer, so I hopped on a bus from Seoul for the four-hour journey.

My mood abruptly changed as soon as we crossed Namhae Bridge and entered picturesque Namhae County, which is located off the southern tip of the Korean Peninsula.

Relatively untouched by city development projects, this small, rustic county seems somehow trapped in time, offering up an idyllic rural landscape. It has peace and warmth written all over it, helping me - a lifetime city girl - shake off the fatigue from the grueling bus ride. 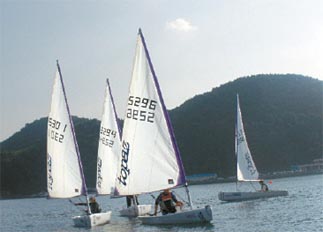 Sailing is one of the leisure activities Namhae offers. The county government and a private company jointly offer affordable sailing classes for locals and tourists. Provided by The Winave

Sadly, the harvest season was over, and this meant that the famous, 108 tiers of golden rice paddies weren’t as magnificent as the pictures I’ve seen in books and magazines. About half of the terraced rice paddies were brown - rice reaped and soil ready for garlic.

Speaking of garlic, it is one of Namhae’s delicacies.

The area’s relatively warm climate lends itself well to garlic cultivation. Namhae garlic has a strong scent and a rich taste. It also can be stored for long periods of time, which is one reason that Namhae accounts for 44 percent of South Gyeongsang’s garlic production.

As the bus curved along the seaside, the clusters of islets grabbed my attention. These islands, and the stories behind them, are another part of the charm of this region of Korea. Namhae County contains 68 of them in all, only three of which are inhabited.

Nodo is the most famous, as it was where Kim Manjung (1637-1692) - a noted vassal, scholar and writer from the Joseon Dynasty (1392-1910) - lived the last three years of his life in exile as a result of late 17th-century political turmoil. It was where he authored “Guunmong” and many other literary pieces that are today deemed classics and appear regularly in Korean textbooks.

“Locals also call this island satgat [bamboo hat] island because of its shape,” said Jo Hye-yeon, our tour guide. “In the coming years, the Namhae County government hopes to develop Nodo into an attraction as part of a ‘literature in exile’ tour program.”

Today there are only stone markers where Kim’s house, well and tomb used to be on Nodo, which is about a 10-minute boat ride from the coast. But Kim wasn’t the only one who was banished to this island. Before him, another Joseon vassal and scholar - Kim Gu (1488-1534) - spent 13 years in exile there.

So it’s understandable that Namhae officials are looking to initiate a literature-in-exile tourism program. It’s funny how areas deemed the most picturesque and relaxing tourist destinations today, like Jeju Island, Geoje Island and Namhae, used to be the places where the government sent people into exile.

If you want more activities than just gazing at rice paddies and islets, sailing is an option. In line with the central government’s efforts to develop Korea’s marine tourism, the Namhae County government joined hands with private sailing school The Winave to offer affordable sailing classes in Mulgoen Port. Opened in March last year, the school has about 20 boats and offers classes to anyone over 10 years old.

“Sailing doesn’t have to be a privilege enjoyed only by wealthy people,” said Oh Jong-yeol, president of The Winave. “We hope to promote the sport among locals as well as tourists.”

Currently, Oh is offering free classes to physically challenged children in the community.

Although I don’t necessarily think it’s the perfect slogan for this endearing area of Korea, I do agree that you can certainly find a treasure or two here.