Shades of 2007 as momentum shifts to Wyverns

Shades of 2007 as momentum shifts to Wyverns 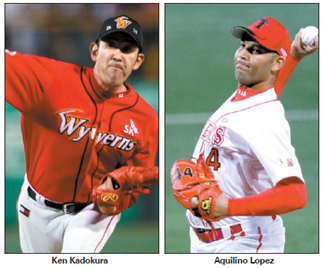 Four games are in the books, and it now all comes down to the final three matches in Jamsil, southern Seoul.

The Kia Tigers and SK Wyverns are tied in their playoff series after each team took turns winning two games apiece on home turf.

After gaining a two-games-to-none lead, Kia seemed to be cruising toward their 10th Korean Series title. However, with two consecutive wins, the momentum of the series has shifted to SK, who are now hoping for a repeat of the 2007 Korean Series.

In 2007, Doosan jumped to a two-game lead as well, but a bench-clearing confrontation ensued in game three. The Wyverns went on to win four consecutive games to take their first Korean Series title.

SK’s manager Kim Sung-geun has referred to the 2007 series whenever he can in interviews. Kia’s manager Cho Beom-hyun has been trying his best to come across as unconcerned by such talk.

“I expected both sides to split the first four games at two games apiece,” Cho said.

What is different about the 2007 Doosan Bears and this year’s Kia Tigers revolves around a deep pitching rotation.

Aquilino Lopez, Kia’s expected starter for game five, is coming off a five-day rest. In contrast, SK’s expected starter, Ken Kadokura, has been on stand-by in SK’s bullpen and was seen icing his shoulder in game four. Additionally, Kia will have Yoon Seok-min well rested and ready for game six. Having lost the past two games, Kia will look for another strong start from Lopez. In game one, Lopez went the distance and limited Wyverns batters to three runs on six hits in eight innings of work.

SK will start Kadokura with hopes of another strong performance from the veteran pitcher.

Kadokura struck out seven batters and gave up one run in five innings of work in game one. He also boasts an impeccable 0.79 ERA in two postseason games so far.

The Wyverns are currently playing for their third consecutive Korean Series title.

SK has shown a lot of character, coming back from a two-game deficit to win three consecutive matchups to take the second-round playoff series.

The Wyverns are showing indications that they can come back against the Tigers, despite missing two of their top starting pitchers.

“SK is a team that is playing in its third consecutive Korean Series. Even I was surprised at the level of performance our players have raised their game to,” SK Manager Kim Sung-geun said.

However, there is no guarantee that SK will be able to repeat the impressive comeback feat of the 2007 Korean Series.

It is true that SK is more experienced, but questions remain as to whether the pitching staff can hold up in a seven-game series. Kadokura and Gary Glover will pitch in their fourth games in the postseason, and the SK bullpen is fatigued due to frequent injuries.

As expected, Kia’s pitching staff has provided the team with respectable outings. In order for the Tigers to hold off the surging Wyverns, they will need their batters to pick up the pace.

In game four, the heart of the Kia batting order was manhandled by SK starter Chae Byung-ryong. Choi Hee-seop, the third hitter in Kia’s lineup, and Kim Sang-hyun, the team’s cleanup hitter, struck out three times against Chae. Choi and Kim will need to produce in the final three games of the series for Kia to stand a chance.

“Our pitchers are playing relatively well, but I’m worried about our lagging offense. We will focus on working on batting practice in team practice and will focus on game five and onward,” Kia’s Cho said.