[Talk of the town] Actors strike a pose

[Talk of the town] Actors strike a pose 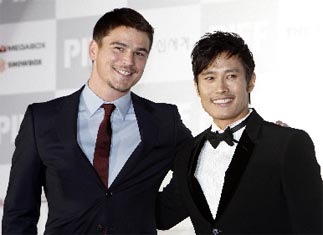 
Korean actor Lee Byung-hun and Hollywood star Josh Hartnett are featured in the latest issue of Vogue Korea. The two actors starred alongside Japanese actor Takuya Kimura in the recent thriller “I Come With the Rain” and also attended the Pusan International Film Festival earlier this month. The photo shoot - taken at a hotel at Haeundae in Busan - revolved around the “Macho Man” concept, which was popular in Italy in the 1950s.

The two developed a close friendship after attending numerous events together. “I only slept two hours and had to do an interview but I was happy because Lee was with me,” Hartnett told Vogue Korea. Lee reportedly even picked up Hartnett at Incheon airport and drove him to Busan. The photos will be featured in the November issue of Vogue Korea.