Six filmmakers confront the struggle of the second time

Six filmmakers confront the struggle of the second time

Six emerging Korean directors returning to the 14th Pusan International Film Festival with their second feature films participate in “Open Talk No. 2,” held during this year’s PIFF. Provided by PIFF

The “sophomore slump” refers to when a second effort fails to meet the standards or expectations of the first. It affects bands, performers and artists of all types - and movie directors are no exception.

Six emerging Korean directors discussed the pressure and the anxiety they felt while making their second films, as well as the challenges of dealing with the changing landscape of filmmaking in Korea at “Open Talk No. 2” during the Pusan International Film Festival, which closed its nine-day run last Friday.

“I feel like I keep growing through filmmaking, even though growing up is something one can look forward to and be afraid of at the same time,” said Lee Song Hee-il, who is well-known for his films, which deal mostly with homosexuality.

The director returned to PIFF this year with “Break Away,” which had its world premiere there and tells the story of runaway soldiers. His first feature, “No Regret,” a gay romance, premiered at PIFF three years ago.

“I feel like a little child who is just about to learn how to walk,” Lee Song said. “In the beginning, people always cheer for you, but once people think you’ve learned, they just leave it to you and see whether you can do it for yourself.

“It’s the same for movie directors - people encourage you when you shoot your first film, considering you yet as a child. But they don’t treat you the same the second time, and I have a feeling that they’ll be even more critical of my third film,” he said.

Lee Hey-jun, whose second feature, “Castaway on the Moon” came out early this year, had a similar experience with his second film.

“With the pressure building, I found it harder and more complicated to make a second film,” said Lee Hey-jun.

Castaway on the Moon starred actor Jung Jae-young and actress Jung Rye-won and illustrates an unexpected encounter between a man living on an uninhabited island on the Han River in Seoul and a lonely young woman living a detached life in the city.

“I realized that as a commercial film director I can’t just make the film that I want to make ? instead, I have to consider the audience,” said the director, whose 2006 debut feature “Like a Virgin” did not do well at the box office here despite having drawn acclaim from local critics.

“I had to understand the fact that my interests don’t always match the audience’s, and there was also the pressure of making a return on the investments in my film,” Lee said.

Park Chan-ok, the director of the multiple award-winning 2002 film, “Jealousy is My Middle Name,” returned to this year’s PIFF to win the Netpac (Network for the Promotion of Asian Cinema) award with her second feature “Paju,” a film about the subtle romance between a man and his dead wife’s sister.

Park also talked about the uncertainty that comes with being a filmmaker as she discussed her seven-year hiatus from the business. 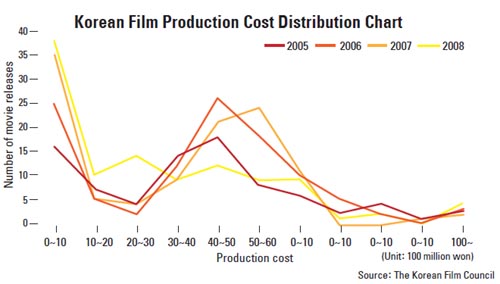 “These budding directors shot their first films when Korean cinema was at the peak of a brisk market,” said Lee Sang-yong, the programmer of Korean films for the Busan film festival. “So it’s no wonder that they now feel pressure.

“In addition, the investment environment in the film industry has changed completely, and many local filmmakers actually disappear after their first film.”

Funding for Korean films declined last year, as a survey conducted by the Korean Film Council indicates. In 2008, the average production cost for Korean films saw a significant decrease to early 2000 levels of 3 billion won ($2.5 million).

The number of films with a budget of less than 1 billion won was 38, accounting for 35.2 percent of the movies released last year. This is in contrast to previous years when the majority of commercial films had budgets of 3 billion won to 6 billion won.

To cope with the situation, filmmaker Kim Dong-won scaled back his budget to make his second feature, “Drifting Away.” In its depiction of a married theater actor’s affair with an actress, the film reveals a cross section of Korean society while also portraying the local theater community. Kim’s debut feature, “Bet on My Disco,” had a bigger budget, he said.

Meanwhile, Lee Seong-han, whose debut feature “Spare” was shown at the Busan film festival two years ago, decided to take a different route to filmmaking.

He established his own production company to make his first film. The company also produced his latest feature, “Wish,” which depicts the violence resident in Korean society through a local high school student’s coming-of-age story.

“[Setting up my own production company] turned out to be good for me because I can do what I want more freely,” said Lee.

Kim Tai-sik, who made his feature film debut with “Driving with My Wife’s Lover” in 2006, made another road movie, “Tokyo Taxi,” for this year’s PIFF. 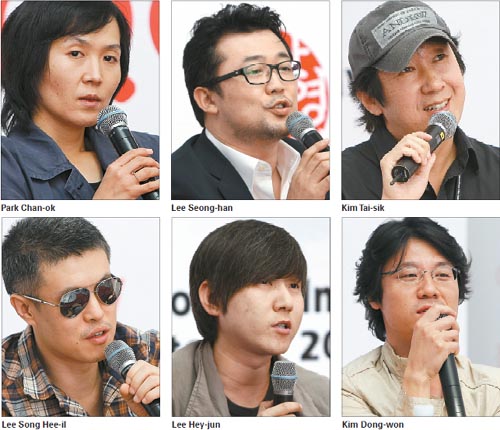 “The other day a foreign moviegoer called me the ‘taxi director,’ which actually sounds similar to my real name,” Kim said with a smile.

But he grew more serious when talking about his profession.

“I was originally a producer of commercials and TV programs, and was a latecomer to the movie industry. I thought it would be great to tell my own stories through film, but now I realize that filmmaking is a costly and complicated job,” Kim said.

He added, half-jokingly, “I don’t recommend it as an occupation.”

However, Kim Dong-won seems to have a more positive view of his chosen profession, saying he finds it is more like an internal struggle that grows more intense as the process continues.

“The filmmaking process itself is like a struggle with the self because you have to work until you are satisfied with the outcome and I feel like I get to know myself better while making films,” he said. “I’d like to be making films with the same energy and passion as I had at the beginning.”