End of road for marathon man

End of road for marathon man 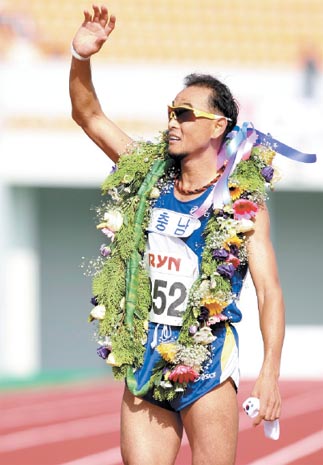 Lee Bong-ju waves to the crowd after finishing first in the marathon at the National Athletics Competition in Daejeon, yesterday. It was Lee’s last race of his 20-year career. By Lim Hyun-dong

It was the perfect finish.

Lee Bong-ju retired from competition after capping off his 20-year career with a gold medal at the National Athletics Competition in Daejeon yesterday.

Competing in the final marathon race of his career, the 39 year old finished the 42.195 kilometer (26.22 miles) course in 2 hours 15 minutes 25 seconds in front of supporters from his home province including his mother, wife and two young sons.

“I want to remember today’s race as the best in my life,” said a misty-eyed Lee at a post-race press conference yesterday. “I was able to last this long because of support from my fans. I started off not knowing anything about the sport and it has been over 20 years already. It’s hard to step away from the sport.”

Lee has come full circle as his first full course marathon race was at the 1990 National Athletics Competition in Chungju, North Chungcheong. Lee placed second in the race and immediately gained attention as a promising runner. He did not disappoint as he went onto win the silver medal at the 1996 Atlanta Olympics. Managing to finish merely three seconds behind winner Josia Thugwane of South Africa, it is one of the closest finishes in the marathon event at the Olympics.

Lee, along with Hwang Young-cho, 1992 Barcelona Olympics gold medalist, were at the forefront of the renaissance in Korean marathon in the international scene. Lee and Hwang won medals at the Olympics for the first time since Sohn Kee-chung and Nam Sung-yong placed first and third at the 1936 Berlin Olympics for the Japanese national team. Korea had been under Japanese colonial rule at the time.

Widely liked for his affable personality, Lee completed a total of 41 races in the course of his career. Lee’s other noticeable accomplishments include winning the 2001 Boston Marathon and a gold medal at the 2002 Busan Asian Games.

What makes his accomplishments all the more impressive is that Lee had to endure pain in his feet throughout the course of his career because of their different sizes.

Although Lee was one of the top competitors leading up to the 2000 Sydney Olympics and at the 2004 Athens Olympics, he failed to meet expectations and finished out of the medal rounds.

Lee’s career all but came to an end at the 2008 Beijing Olympics as he finished 28th overall. The veteran runner announced his retirement from the national team at the time and announced he would retire from the sport in 2009. He said he now plans to focus on completing his master’s degree and spending more time with his family.