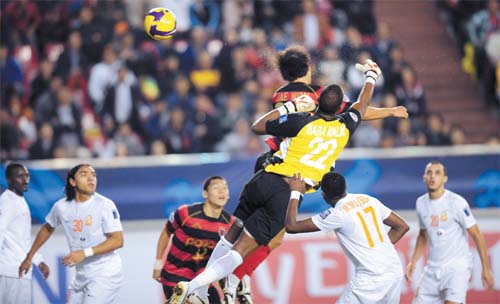 The Pohang Steelers are promising not to let up in the second leg of the semifinals now that they are one match closer to a spot in the AFC Champions League finals at Tokyo’s National Stadium on Nov. 7 .

Pohang handed Umm Salal a 2-0 defeat on Wednesday night in Pohang, North Gyeongsang, to give its manager Sergio Farias his 99th win with the Steelers.

“We won by two goals but nothing has been determined yet,” Farias said in a post-game press conference. “We have to play the second leg to determine who will advance to the finals.”

The Steelers now head into the second-leg matchup at Qatar Sports Club in Doha, Qatar on Oct. 28 with a two-goal cushion and will force Umm Salal to play out of their skins.

And in the meantime Farias will have a chance to notch up his 100th win against Gwangju Sangmu in K-League matchup.

However, with the second leg of the AFC Champions League semifinal days away, Farias is expected to rest some of his key players. This could set up the possibility of Farias reaching his personal feat and securing a berth in the Champions League finals in Doha.

The Qatari club has shown a tendency to play defensive games and its players have the tendency to delay games. This was evident in the quarterfinals against FC Seoul. Having won the first leg by 3-2, Umm Salal needed to draw in Seoul to advance to the semifinals. Upon making contact with FC Seoul players, Umm Salal players easily fell to the ground and took their time. They eventually drew the game 1-1.

Although Umm Salal also attempted to slow the pace of the game on Wednesday, Pohang pressured its opponents with a fast-paced game, which proved too much for the Qatari club. Leading the way for the Steelers were team captain Hwang Jae-won and midfielder Kim Jae-sung who both scored off headers.

“Our players looked nervous in the first half and they rushed several scoring opportunities,” Farias said. “It’s regrettable we failed to capitalize on several opportunities.”

The Brazilian manager went on to state that he was content with the team’s defense and its ability to contain the opposition’s top forwards, Magno Alves and Davi. Farias and his coaching staff had prepared his team for the counterattacking style of Umm Salal using the two Brazilian forwards.

“We will approach the second-leg match as the final match and will give it everything we have,” Farias said. “If we set our goal at winning the match, we will net good results.”

In the other semifinal matchup, Saudi Arabia’s Al-Ittihad trounced the Nagoya Grampus, 6-2 at the Prince Abdullah Al Faisal Stadium in Jeddah, Saudi Arabia on Wednesday. Grampus will attempt to muster an comeback at Mizuho Athletic Stadium in Nagoya on Oct. 21.