Gavras brings a touch of class to Busan

Gavras brings a touch of class to Busan 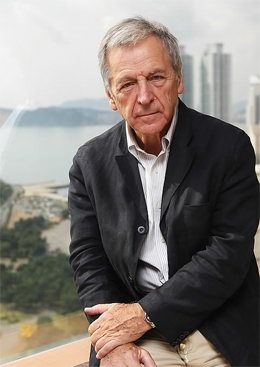 Costa Gavras says the experience of watching movies is changing because more people tend to watch movies in smaller groups or alone rather than go to the cinema en masse. Yonhap

One of the great pleasures that cinephiles can expect at a movie festival is coming across actors and directors whose work they adore but have met only through the screen.

Those who attended the Pusan International Film Festival this year had the opportunity to hear from world-renowned director, Costa Gavras, in the Master Class program.

There were also screenings of his latest film “Eden is West” and the legendary “Z” during the festival.

The Greek-born French filmmaker, who is well known for his films dealing with political themes, made his name with the film Z.

This 1969 movie dealt with the assassination of the Greek politician Gregoris Lambrakis in 1963. The film won the Best Actor award and the Jury Prize at the Cannes film festival in 1969, followed by the Best Film Editing and the Best Foreign Language Film at the Academy Awards a year later.

“Greece was ruled by the military dictatorship at the time when I made Z, which was my way of coping with the situation,” the 76-year-old director said.

“The world is so wide and there are so many people out there. In the circumstances, a movie cannot but be about individuals, and in fact, I think a movie about two or three people can tell more about something than films trying to deal with everyone,” he said. “That is, by making a film about individuals, I can tell a universal story that would transcend everywhere.”

The knowledgeable filmmaker also touched upon some changes underway in cinema today.

“When I was young, going to the cinema once or twice a week was one of the great pleasures in life and dialogue with others after seeing a movie together also served to build a close relationship between people.

“However, such ‘cinematic experience’ seems to be disappearing nowadays with the development of digital technology, which allows people to see a movie personally through devices like cell phones,” he said. “How cinema should reestablish itself in the digital era is a question to be dealt with by the coming generation.”

He went on to say that PIFF is significant because it creates a basic interest in films.

“[It] brings us together and lets us know what’s going on in the movie world of many different countries,” Gavras said.

He later commented that PIFF is a film event that is comparable to the Cannes film festival.

The veteran director didn’t forget to pass along some valuable words to be remembered by the younger generation and those who aspire to follow in his footsteps.

“What I’d like to ask the youth of today is to live with passion, which is the most important element in one’s life, and it also applies to filmmakers as I think passion enables you to make a good story and film,” he said.

“I know it is relatively easy for filmmakers to get support when they make their first film, but not any more from the second time - but remember that talent will show itself and eventually be recognized.”

Meanwhile, the internationally acclaimed Korean director Park Chan-wook is planning to remake Gavras’ 2005 film “Le Couperet (The Ax)” for his next project.

It will mark the first time Park has worked on a remake.