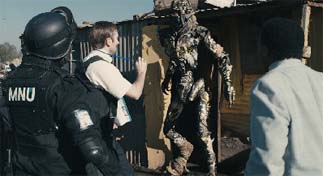 Wikus (Sharlto Copley) serves an eviction notice to an alien in the unsettling and complex “District 9.” [CineSeoul]

After “The Day the Earth Stood Still” was released in 1951 (completely Keanu Reeves-less), it was given a Golden Globe Award for “promoting international understanding.” Even if they still did that sort of thing, it’s hard to imagine a science-fiction film being worthy of such an honor today.

Good science fiction with something to say is a precious rarity in this age of Michael Bay and “bump-in-the-dark” alien movies, which is what makes “District 9” such a shock.

If you’ve seen the unfortunately kitschy posters around Seoul, you know this is a movie about aliens - and yes, it uses a lot of the tropes we’re all familiar with. But it turns them entirely on their heads to address racism, xenophobia, greed and the capacity of a regular human being for callous cruelty.

Aliens have arrived on Earth, but it wasn’t quite what anyone expected - their mothership appears to be nonfunctional, drifting to a stop not over New York or London, but Johannesburg, South Africa. (The film is inspired by real events that occurred during apartheid.)

The aliens who arrive on Earth are neither menacing superbeings nor cutesy E.T.s. Derogatorily referred to as “prawns,” they are malnourished, sickly and in need of help. They’re moved into a temporary holding area that quickly becomes a slum: District 9.

These details are given to the audience in a partly faux documentary style, and it’s an effective technique. After 20 years the citizens of Johannesburg get fed up with the aliens, who live in rundown shacks and rummage through garbage for the cat food they love, and the decision is made to evict the prawns and send them north to a facility called District 10. Selected to carry out this eviction is an organization known as Multi-National United, and a field agent named Wikus van de Merwe (Sharlto Copley). It’s Wikus’s job to lead a team into the district and get all the aliens to sign forms agreeing to the evictions.

But once the operation starts, it’s clear Wikus has no respect for these creatures, who look rather like bipedal crickets but are intelligent and have their own language. He assumes every prawn is a criminal, and though he finds his trigger-happy escorts’ killings distasteful, he’s the one who searches almost every house for weapons and burns their eggs. Soon, though, something goes terribly wrong, and Wikus sees the dark side of his employers, becoming a fugitive who can only rely on the aliens for help.

District 9 is about xenophobia at large, and how if encouraged by society it can grab hold of even a gentle soul like Wikus. It’s a startling and brilliant debut by South African director Neill Blomkamp, who based District 9 on ideas from a short film of his. Blomkamp has only directed music videos, short films and commercials before.

Affecting, complex, disturbing and relevant, this is definitely the best science-fiction film of the year. District 9 will take its well-deserved place alongside the all-time greats of its genre.