4 overseas rookies get chopped at start of KBL

4 overseas rookies get chopped at start of KBL 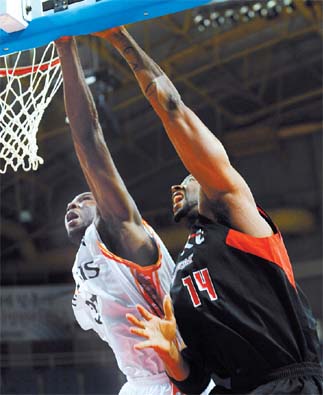 Abdullahi Kuso of Mobis attempts to block a shot by Donald Little of KT during a match on Tuesday. [NEWSIS]

Now that the Korean Basketball League’s 2009-10 season is in full swing, there have been mixed reviews about the new crop of players drafted during the offseason.

Chun Tae-poong of KCC, Lee Seung-joon of Samsung and Moon Tae-young of LG have been talked about in positive terms.

Moon, or Gregory Stevenson, of LG has been a surprise in the first three games of the season. The University of Richmond product was taken third overall in the KBL Half-Korean draft and has been an threat with his inside scoring and rebounding, and his perimeter shots. The 31-year-old forward has averaged 21.3 points, three assists and nine rebounds to help his team to three wins and no losses.

Chun has averaged 14 points, 5.5 assists and five rebounds but KCC has started slow, losing two games to start the season. Lee is averaging 15.5 points and nine rebounds in two games.

Not all players drafted in the offseason got off to a good start. Just three games into the Korean Basketball League 2009-10 season, a fifth of the foreign player draft of this year have been released by their respective teams. Four out of 20 players have been replaced so far.

Abdullahi Kuso, who was taken in the second round (13th overall) by Mobis after averaging six points and seven rebounds in 22 minutes of play was released. Kuso is a bit of a surprise considering he is a Muslim and the center was coming off a fasting period during Ramadan. Mobis have replaced Kuso with Aaron Haynes, who played for Samsung last season.

KT dropped Greg Stiesma, who played for SK last season. KT regarded Stiesma high regard after the University of Wisconsin alumnus averaged 13.9 points and nine rebounds for the Knights last season. But more importantly, KT’s coaching staff was said to have been impressed with Stiesma’s character. Donald Little, who played for ET Land last season, will replace Stiesma. And KCC, the defending champions, released their second-round pick, Matt Tuck. His knee injury is said to be the reason. Ivan Johnson, who played for LG last season, has been signed in Tuck’s place. And Samsung dropped its second-round pick Brian Matthews in place of Victor Thomas, formerly of Samsung Thunder.

Each team is allowed two foreign players on their roster.