Making friends with the little guys

Making friends with the little guys 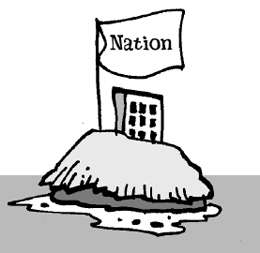 There is a concrete structure the size of a swimming pool 10 kilometers (6.2 miles) off the southeast coast of England. This facility is the only territory of the Principality of Sealand, which fancies itself the world’s smallest independent sovereign state. It used to be Maunsell sea fort, a fortified tower built during World War II to help defend Britain against Nazi Germany. Major Paddy Roy Bates realized that Britain could not exercise its sovereignty over the island according to international law and landed on the island and founded a country in 1967.

Fundamental requirements for the founding of a country have been fully met, as Sealand has its own independent currency, stamps, passports, Constitution and national flag.

It has also engaged with the international football community with the establishment of its own national football team. However, it is not yet recognized by any of the constituent nations of the United Nations. When a fire broke out in the generator room and spread throughout the facility in 2006, an unprecedented national disaster, the 10 permanent residents fled to Britain.

Meanwhile, it is an undeniable fact that micronations formally recognized as independent sovereign nations exist.

Television viewers who watched the opening ceremony of the 2008 Beijing Olympics with the participation of a total of 204 nations might have been surprised to find that so many countries exist all over the world. Obscure micronations, such as Vanuatu, Sao Tome and Principe, and Cape Verde, sent national teams with their flags at the head.

The Republic of Seychelles is an island country of a similar kind east of Africa. It has a population of 87,000 with scarce natural resources and derives a fair share of its income from tourism.

Hu Jintao, the president of China, the world’s largest country, and Wu Bangguo, chairman of the Standing Committee of the National People’s Congress, took turns visiting the country in 2007 and 2008, which surprised the world. This is in the deep-rooted tradition of Chinese diplomacy.

China, which rose to the rank of a nuclear-armed state in the 1960s, succeeded in becoming a permanent member of the UN Security Council in 1971. Behind the backdrop of China’s admission on a vote of 76 in favor, 35 opposed, China’s friendly relations with African countries has worked favorably.

We believe that inviting Seychelles’ president to visit Korea last week was an excellent idea.

It is natural that if we form relationships with people guided by self-interest, we will fail to make good friends in times of trouble.

We should strive to yield tangible results in terms of enhancing our friendly ties with other countries, rather than be elated by our success of becoming a host country for the G-20 gathering.