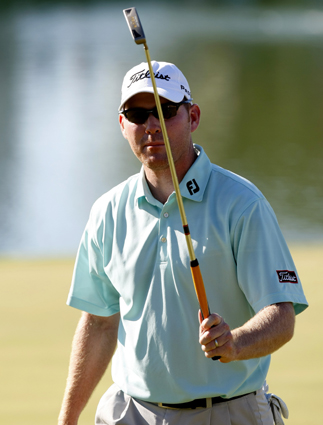 SCOTTSDALE, Arizona - American Troy Matteson fired his second consecutive nine-under par 61 on Saturday, a U.S. PGA record, to seize a three-shot lead after the third round of the $5 million Frys.com Open.

On a stunning day for scoring that saw three aces and an albatross, Matteson fired 10 birdies that included four sets of back-to-back birdies, one after his lone bogey at 13 and two more to open and close the back nine.

Matteson’s back-to-back 61s beat the prior 36-hole consecutive PGA low of 123 achieved by U.S. veteran Steve Stricker with a 61 and a 62 in the final two rounds of this year’s Bob Hope Classic.

“The first one was pretty amazing,” Matteson said.

“I’ve never shot 61 in practice or out here. To have it happen again, I’m a bit beside myself. I can’t tell you how it happened.

“I’ve had a lot of really good looks at it. I’ve hit it in the right places,” he said.

Matteson, whose only PGA title came at this event in 2006, stood on 16-under par 194 with South Africa’s Tim Clark and Americans Chris Stroud and Webb Simpson sharing second on 197.

Matteson is only ranked 131st but can secure a guaranteed place on the 2010 tour with a triumph. AFP