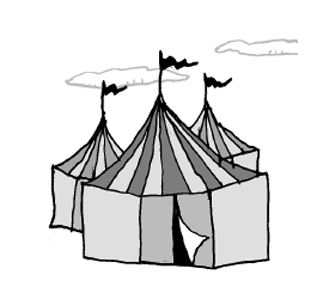 In one of his satirical poems, the second-century Roman poet Juvenal writes that common folk are more interested in two things - “bread and circuses” - than they are in their own freedom. In this passage, he criticizes people who give up their democratic rights while indulging in the sweetness of welfare and entertainment.

In China, too, written records show that Emperor Wu of the Han Dynasty invited a large number of envoys from abroad and entertained them with a grand circus show called “One Hundred Tricks” in 108 B.C. Considering that the names of the stunts, such as “East Sea Yellow Duke” and “Fish and Dragon Sweep,” appear in a book written by a scholar in the second century, it seems that acrobatic circuses were already highly developed at that time.

But after entertaining humans for almost 2,000 years, circuses faced a crisis in the later part of the 20th century all over the world. With the growth of industrial society, live circuses had to compete with other entertainment such as television, films and professional sports competitions.

Domestically, the Dongchun Circus, which boasts of 84 years of history, has declared that it is going to close in November due to financial difficulties.

However, Canada’s Cirque du Soleil, established in 1984, has proved that circuses are far from an outdated form of entertainment. This troupe succeeds in attracting the attention of the audience by giving modern touches to the music, lighting, costumes and story of existing circuses.

Since its establishment, the circus has toured around 200 cities and attracted 900 million audience members so far. Next year, it plans to stage 20 different performances all over the world.

There is also the Shanghai Circus, which many visitors recall as that city’s most impressive tourist attraction. It boasts a long tradition of ancient and honorable Chinese stunts, but was revitalized completely in 1994 after the acrobatic show “Golden South-western Wind” became a big success.

It also appeared that the sun was setting on musicals staged at London’s West End theatres until composer Andrew Lloyd Webber and producer Cameron Mackintosh collaborated to revive that scene.

These examples teach us that a certain genre of entertainment does not disappear only because it has been around for a long time. Rather, they show the wisdom of continuous evolution guided by careful observation of changes taking place in the market.