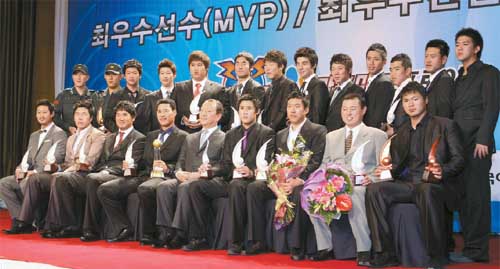 Merely days removed from their dramatic title-winning game seven victory in the Korean Series, Kia Tigers third baseman Kim Sang-hyun won the 2009 season’s Most Valuable Player award. It was a solid win for Kim, who captured 79 of the 90 press votes to take the award.

“I want to thank the fans, my wife and my family,” Kim said upon receiving the MVP award at the Lotte Hotel in Jamsil, southern Seoul yesterday.

It has not been an easy road to the top for Kim, who persevered through several years in the minors.

“Having been labeled a prospect since day one, I’ve always had confidence. However, injuries and bad luck contributed to the time I spent in the minors. I hope all the players in the minors can have faith in the fact that even if they spend time in the minors, they too, can become an MVP as I did,” added Kim.

Kia’s cleanup hitter had a banner year with the Tigers after having been acquired from the LG Twins in a mid-season trade. The 29-year-old hit 36 home runs and 127 RBI to become the most productive batter since Lee Seung-yeop hit 56 home runs and 144 RBI for the Samsung Lions in the 2003 season.

Kim played a significant role in Kia’s Korean Series title-winning season by smashing 15 home runs in the month of August and helping the Tigers finish the regular season atop the league standings for the first time in 12 years.

Although Ahn was the youngest All-Star MVP and became the youngest to hit a home run in game seven of the Korean Series, he came up short in the voting for the top rookie honor. Doosan’s Lee was impressive in his rookie season. He tied Jon Adkins of the Lotte Giants for the league lead in saves with 26. Lee made 51 appearances and posted two wins and 26 saves with a 4.20 ERA.

With the 2009 season now in the books, baseball fans can look forward to the start of the free agent signing period, set to start Thursday. The two biggest names to hit the free agency market this fall are Kim Tae-kyun and Lee Beom-ho of the Hanwha Eagles.

While both have been linked to Nippon Professional Baseball teams, recent reports indicate Lee is the more likely of the two to make the jump to an NPB club. Lee boasts significant power at the plate and is a respectable third baseman. Still, speculation that Kim and Lee just might end up staying in Korea remains because Hanwha, LG and Samsung are in the race with the NPB teams.

Lee Byung-kyu, who was released by the Chunichi Dragons, is also expected to draw considerable amount of interest from KBO teams.