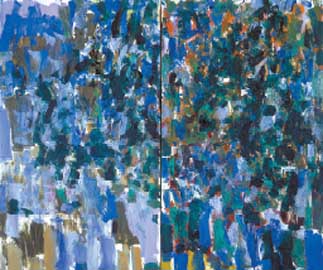 Abstract paintings are often difficult to understand because they don’t represent anything that exists in the real world.

The works of the late Joan Mitchell, regarded as one of the world’s top abstract expressionists, are no exception.

The odd composition and lack of visual reference found in her paintings and drawings create a noticeable separation from reality, but her strong brushstrokes and color schemes show a hefty dose of passion.

Mitchell worked primarily from her visual memory and sought to convey nature through the use of lines and movement.

“I paint from remembered landscapes that I carry with me - and remembered feelings of them, which of course become transformed,” the artist once told a writer penning a piece about her. “I would rather leave nature to itself. I do not want to improve it.?.?. I could certainly never mirror it. I would like to paint what it leaves me with.”

Six paintings and 28 drawings produced by Mitchell from the 1950s to the 1990s are currently on display at the Kukje Gallery in central Seoul. The exhibition, titled “Drawings,” features works that portray the artist’s love of nature, affection toward family and friends and her fear of death.

Born in Chicago in 1925, Mitchell played a critical role in the development of abstract expressionism, which took off in the United States in the late 1940s and continued through the 1960s. It was one of the most important art movements of the 20th century, producing notable artists such as Willem de Kooning and Jackson Pollock. Mitchell became a well-known part of the New York art scene after she took part in the historical “9th Street: Exhibition of Paintings and Sculpture” in 1951.

The exhibition now on display in Seoul shows the changes in her style from the 1950s to the 1970s. In the 1950s, her paintings displayed strong but short strokes, while in the 1960s she used dark and robust colors on white backgrounds. In the 1970s, she began to illustrate what look like blocks, conjuring up the works of Mark Rothko, another abstract expressionist. Mitchell died in France in 1992 at the age of 67.

Mitchell’s works are in major public and private collections including the Whitney Museum of American Art, the Museum of Modern Art and the Solomon R. Guggenheim Museum, all in New York; the Tate Gallery in London; the Osaka City Art Museum of Modern Art, located in Japan; and the Leeum, Samsung Museum of Art in Seoul.