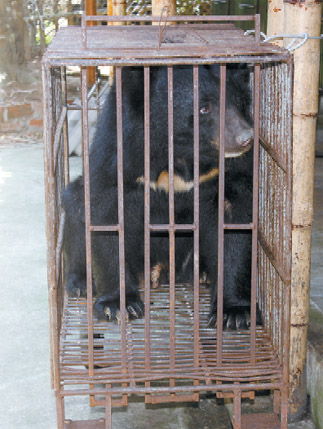 A moon bear is raised in a cage at a bear farm run by Koreans in Ha Long in Quang Ninh Province in Vietnam. The managers of such farms allegedly extract bile from living bears and sell it to Korean tourists. Provided by Education for Nature-Vietnam

Some Koreans have a seemingly endless appetite for products that promise to boost their health or sexual prowess, prompting them to eat food items that would seem unconventional by Western standards. One such product is bear bile, known in Asia for its medicinal properties. To get it, a significant number of Koreans are traveling to bear bile farms in Vietnam, where they can buy bile extracted from moon bears raised in cages. The problem is that many of these Korean travelers are unaware that such activities are illegal in Vietnam.

These days, the sale and transport of bear bile has grown to such an extent that one Vietnamese lawmaker is currently taking action against the Korean government. If he continues to build support for his actions, they could ultimately threaten the expanding ties between Korea and Vietnam.

The two countries came together last week in Hanoi, where they agreed to upgrade their relationship to that of a strategic cooperative partnership.

In an interview conducted last Friday via Skype, Nguyen Dinh Xuan, a Vietnamese National Assembly member, said he recently sent a letter to Korea’s Environment Ministry, urging the Korean government to find a solution to the problem. That fact was later confirmed by the Korean ministry.

“A Vietnamese politician named Nyuyen Dinh Xuan said in a letter that Korean businessmen and tourists are involved in illegal bear bile sales in Vietnam,” said Kim Won-tae, a senior deputy director of the ministry. “He requested that we instruct the Korean public to refrain from engaging in these illegal acts when they travel to Vietnam,” Kim said. 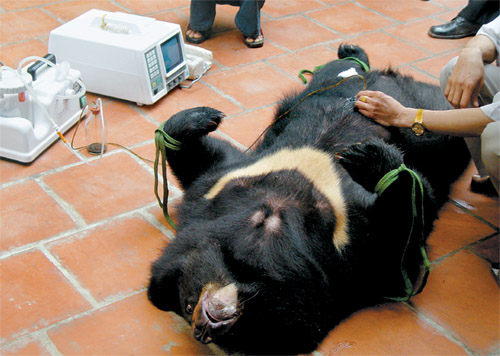 A moon bear taken out of a cage lies unconscious at a bear farm run by Koreans in Ha Long, Quang Ninh Province, Vietnam, as farm managers extract bile from the animal in front of a group of tourists.

In talking about the bear farms, Xuan said moon bears, an endangered species, are raised in cages at the farms, many of which are operated by Koreans who extract and then sell the bear bile to tourists. Keeping bears in captivity for the purpose of extracting bile is illegal in Vietnam.

Even worse, Xuan said, is that the farms sell the bear bile to Korean tourists, who take the product back to Korea, unwittingly violating the Convention on International Trade in Endangered Species of Wild Fauna and Flora, or Cites. The international convention, observed both by Korea and Vietnam, forbids the cross-border trade of endangered wild animals, including bears. Xuan was speaking in his native Vietnamese through an interpreter who translated his words into English.

According to the Vietnamese media and civic groups, around 10 bear farms in Ha Long City, Quang Ninh Province, a famous tourist destination known among Koreans as “Ha Long Bay,” are keeping hundreds of bears in cages and harvesting and selling the bile. Video footage of these activities filmed by undercover Vietnamese police and civic groups was televised nationwide in Vietnam earlier this year.

“There was a recent and well-publicized investigation by the police in Vietnam that resulted in the discovery of the illegal tour activity,” Xuan said. “We want to emphasize that we feel regret for this, and we hope that we might work with others in the future to stop such violations from occurring.”

Xuan said he is not the only politician in Vietnam taking action on the issue. According to Xuan, all 33 members of the Committee of Science, Technology and Environment of the National Assembly in Vietnam, to which Xuan also belongs, oppose the farming and export of bear bile and are working to put it to an end.

A graphic glimpse of the bile harvesting process can be seen in a video posted on YouTube. In the video, which was filmed by an undercover reporter and broadcast by a Vietnamese television station, a moon bear taken out of a cage lies unconscious as its bile is extracted. The video also shows several tourists observing the entire process.

On the wall of the farm, the Korean word jeopgeungeumji, meaning no trespassing, can be seen, underlining the complicity of the Koreans who go there. A close-up shot of the business cards of the Korean representatives of the farm is also shown in the video.

This is not a one-time occurrence, Xuan says. The environmental group Education for Nature-Vietnam, which Xuan said made him aware of the issue, claimed that it had conducted an undercover survey last year. Through the survey, the group said it discovered that there were more than 100 tourist buses transporting around 1,500 Korean tourists to bear farms in the span of just 10 days in April and August.

The director, who spoke on the condition of anonymity because he said his firm had been involved in sales of bear bile to Korean tourists in the past, said many Korean travel agencies offer package tours to Vietnam that include visits to bear bile farms in Ha Long.

“It is a lucrative business for travel agencies because a significant portion of the profits from the sales of bear bile to tourists return to us in the form of commissions,” the travel agency director said.

He said Korean tourists to Vietnam are taken to buy the bear bile.

One Korean left some information about the price on her blog (http://blog.naver.com/roseoil). She said she had traveled to Vietnam with her husband in September 2007, and was taken by a guide to a bear farm in Ha Long. The farm extracted the bile from a living bear in front of her and the group of assembled tourists and then tried to sell them the bile, she said. 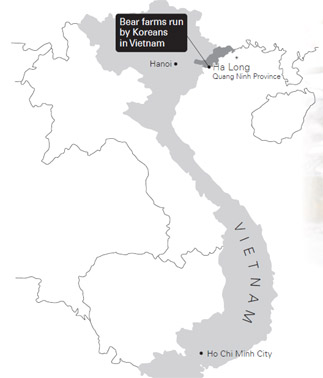 In Korea, a single bottle of bear bile can cost millions of won.

The travel agency director said he stopped taking the tourists to the bear farms after he learned that the bile sold there could be harmful to humans.

The farmers mix the bile with chemicals, which reduces its potency, he said, adding, “There is a reason why it is cheap.”

Critics say that in addition to the greed of those who sell the bile, it is the buyers’ ignorance of the illegality of the practice that serves to perpetuate the problem.

Unlike in Vietnam, bear farming and the sale of bear bile is legal in Korea. In the 1980s, the Korean government made it legal to breed bears. It was a way to assist struggling local farmers as well as boost the population of moon bears, an endangered species. Some bears are raised for sightseeing activities, but most are destined to be killed for their organs, bile and meat. 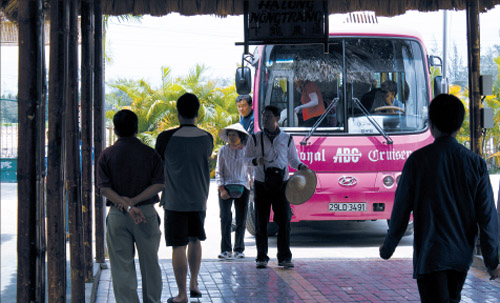 The slaughter of bears is also legal here, as long as the bears are 10 years old or older. According to Kim Mi-young, an activist at Green Korea, a local environmental group, citing Environment Ministry data, there were 1,374 bears raised at 74 farms across the country last year.

Conservationists say ignorance of the illegality of the practice causes many Korean tourists to buy bear bile illegally in Vietnam, although they have no intention of breaking the law.

“It is illegal to buy [bear bile] outside the country, and legal to buy it in Korea; people are just not educated,” said Kelly Frances McKenna, a volunteer activist campaigning against the bear bile trade and the author of the educational Web site, Bear Necessity Korea (http://bearnecessitykorea.com/).

McKenna said the legality of bear farming in Korea is putting increasing pressure on the government for the inhumane killing of bears. Sometimes bears younger than 10 years old are killed, she said.

The government, meanwhile, is grappling to find a solution as struggling farmers appeal for compensation and an exit strategy, she said.

That, McKenna said, explains why the Korean government has been slow to take action on the bear bile issue in Vietnam. “It is an additional burden for them,” she said.

Douglas Hendrie, an American activist with ENV, said the organization had sought to cooperate on the issue with the Korean Embassy in Vietnam and sent a message to that effect last year. But there have been no significant follow-up measures as yet, he said. Korea’s Foreign Ministry did not return calls seeking confirmation of Hendrie’s statement.

Meanwhile, the Korean government has begun to take action, however slowly. The Korean Customs Service said it plans to launch a public awareness campaign next month at Incheon International Airport in cooperation with Green Korea.

“Based on the information that Green Korea has provided, we are aware that the sale of bear bile by Koreans in Vietnam is becoming a problem in that country,” said Park Heon, deputy director of the Clearance Planning Division at the Korea Customs Service. “Not many Koreans know that it is illegal to buy and transport bear bile,” he said. “So we will launch a campaign in mid-November to let the Korean public know about the illegality of the practice.”

Critics say it is a welcome move, but that it may not go far enough to resolve the problem.

Hendrie said the Vietnamese government is raising its voice on the issue. Recently, the Vietnamese media reported that the Environmental Police in Vietnam had raided one bear bile farm in Ha Long. The report stated that some Koreans were caught for their alleged involvement in the sale or purchase of bear bile; they had their passports temporarily confiscated, copied and filed by the police before they were sent back to Korea.

“Many of us in the conservation community were pleased to see the raid by the Environmental Police. It was an important first step in closing down illegal bear bile tourism operations, and ensuring compliance with the law,” Hendrie said.

Xuan believes that more actions could be taken. But he was apprehensive that the issue could drive a wedge between the two countries’ efforts to improve their recently renewed relations. Instead, he hopes to see the two resolve the issue together, which he thinks could work to strengthen their bilateral relationship.

“We have a good relationship with Korea,” Xuan said. “This involves a small group [i.e., the tour operators], and we welcome a joint effort between our two countries to end this illegal activity.

“I believe that this issue can be resolved easily and quickly via the Korean Embassy, with our environmental ministries working together and communicating effectively.”