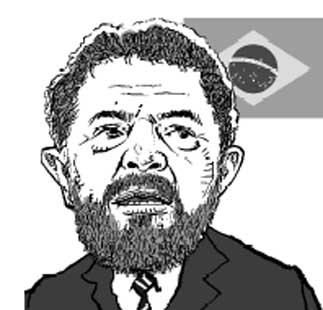 For this boy, the street was his school. He was the seventh of eight children born to a longshoreman. He had to earn his bread if he did not want to go hungry. At the age of 6 or 7, he started selling peanuts, moving on to polishing shoes and eventually becoming a factory worker.

At the age of 24, he got married, but his marriage did not last long. In the last month of his wife’s pregnancy, she fell ill and passed away without getting any proper medical treatment.

After her death, he shut himself up in his house for six months, and emerged as a different person. He dreamed of building a society where people get equal treatment regardless of their economic status. He devoted himself to the labor movement. He founded a workers’ party, and after running for the presidency four times as the candidate of his party, he was finally elected.

This is the story of Luiz Inacio Lula Da Silva, better known as Brazil’s President Lula.

Although Brazil is a BRIC nation and has become better off economically, Lula’s dream is not yet fulfilled. This is evident in the growing number of favelas. Favela, which means slum in Brazilian Portuguese, is generally used to label shantytowns in Brazil. Shantytowns are built on hills throughout metropolitan areas and pack the city like wildflowers. In Rio de Janeiro itself, there are over 900 favelas and they surround hotels and wealthy residential areas along the beach, encircling the islands of luxury and means. One out of three Rio residents lives in the favelas.

The most serious problem in dealing with favelas is that they are the headquarters for large-scale criminal organizations dealing in narcotics. Although gangsters armed with heavy weapons hold shootouts frequently, police do not dare to approach them. For the poor and uneducated youngsters of the favelas, sometimes the only choice they have is to become a member of a criminal gang. With a life spent wielding a gun the only option for many, it is no surprise that there were 4,631 murders in Rio last year.

When Rio was chosen as the venue for the 2016 Olympic Games, the task set out for Brazil by the international community was clear: Wipe out crime. Lula declared a war against criminal organizations headquartered in favelas, saying, “We are going to do whatever is necessary to clean up the dirt that these people leave across Brazil.” However, his proclamation did little to ease people’s fears, as a police helicopter was shot down and some 20 policemen were killed during the first cleanup operation.

The residents are raising their voices, demanding that the favelas be made better places to live. Instead of trying to hide the shady spots of society, as if burying one’s head into sand, favela-dwellers find it necessary to sever the vicious circle of poverty and crime.

Human rights organizations point out that in the course of the preparations for the 2008 Beijing Olympics, the livelihoods of more than 1.5 million Chinese grew worse, because when they were driven out of their shantytowns, there was no longer a place for them to earn their livings. The Olympic Games might be a blessing for a nation, but they can be a curse for the poor. I am curious to know what remedies Lula, who knows poverty, will utilize to solve Brazil’s problems.