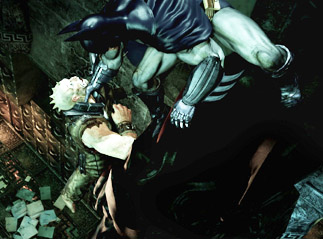 Video game adaptations of movie franchises have a long and mind-numbing history. Ever since the Atari version of “E.T.,” still considered arguably the worst game ever made, nearly killed the entire medium in 1982 with thousands of unsold copies destined for dumping in a New Mexico landfill, adaptations have been anathema to serious gamers and developers alike.

Fortunately, having a successful and active film franchise didn’t stop Warner Bros. from giving Rocksteady Studios the time, money and creative resources they needed to create not only the best Batman game, but perhaps the best comic book game ever.
As “Batman: Arkham Asylum” opens, the guardian of Gotham has just returned the Joker to the titular high-security island prison-hospital - but of course, he doesn’t stay caught for long. It turns out the Joker had planned his capture and has his cronies waiting on the inside to transform the island into a base from which to wreak havoc on Gotham City with an army of super-soldiers - and, of course, to toy with Batman.

Years of work and much trial-and-error went into the gameplay (the combat reportedly went through several complete rebuilds, including a “rhythm action system”), and it shows. Though most of the game involves beating up bad guys from a third-person perspective, the developers change it up frequently to shake up the player and offer some variety. Arkham is one of just a handful of games that can actually be played through as a beat-’em-up or by using stealth. (And swooping down from a stone gargoyle to string up an unsuspecting thug is just as much giddy fun as it should be.) In a few sequences, Scarecrow pumps Batman full of his fear serum, which leads to compelling battles with a psychological component (even if they get a bit stale).

Maybe Arkham managed to avoid the movie curse because it’s not really based on the movies - in fact, it’s closer to the brilliant “Batman: The Animated Series” from the early 1990s, the startlingly mature noir cartoon that every male my age remembers watching as a kid. That similarity is no surprise either: The script is penned by Paul Dini, a producer and key writer on the show, and features the same voice cast, including Mark Hamill as the Joker and Kevin Conroy under the cowl.

But what makes Arkham so involving is not just the combat, the story or the voice acting - it’s the attention paid to creating an immersive, atmospheric and detailed game world. An old rule of thumb goes that the more implausible a story’s premise and characters, the more realistic everything else has to be in order to compensate, and Batman’s characters are certainly ridiculous. The villains in the game (all pulled lovingly from the comics) include a giant crocodile man, a seductress who is half-plant, a man in a scarecrow outfit and a guy who pumps steroids directly into his veins.

Yet the developers love these characters and their setting so much that none of that matters. Side “search” quests offer further glimpses into the Batman universe, and the environment is forboding, changing as Joker and Poison Ivy corrupt it with their plans.

Every gamer should pay a visit to Arkham Island, which seems alive with the ghosts of its past and the demons of its present. Depending on how much you love the Dark Knight, it has a good shot at being the top single-player experience of the year.

Rating: ★★★★: Solid entertainment, especially for fans of the genre.