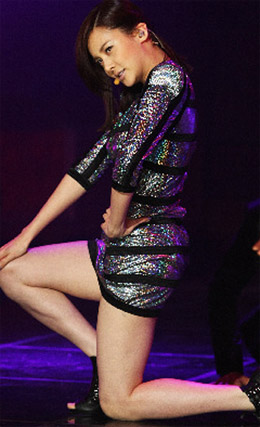 Female singer Ivy made her comeback at a club in Gangnam, southern Seoul, on Tuesday after a break that stretched for two years and eight months. Her long absence from the stage was tied to a threat from her ex-boyfriend.

On Tuesday, she sang “Touch Me” - which is also the title of her third album, to be released today - and the ballad “Goodbye Tears” along with her previous hit “Sonata of Temptation,” among other songs. Touch Me, co-produced by singer Psy and Yoo Keon-hyung, has a simple beat of electronic pop sounds, which she livened up with dance moves.

Aside from the performance, a reality show on Mnet called “Ivy Back,” which delves into the singer’s life, also premiered on the same day.

“I missed the stage very much,” Ivy said during a press conference after her performance. “I was trying to portray a stronger and confident female figure with futuristic sounds.”