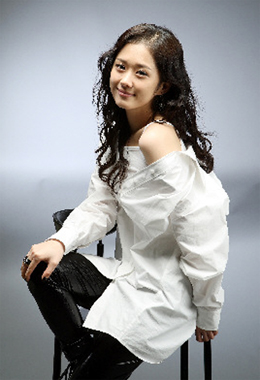 After a long hiatus, singer-turned-actress Jang Na-ra has returned to the big screen with the film “Sky and Ocean.”

Asked why she chose this particular film to make her comeback, Jang said she has a lot in common with Sky and Ocean’s protagonist and that she was drawn to the movie’s heartwarming story.

“It is a movie that will comfort you when you are exhausted, like warm soup helps soothe your burning tongue after eating spicy food,” the actress said.

Sky and Ocean is a drama that follows the life of Haneul (played by Jang), who lives a detached life due to a disability. Haneul meets Bada (played by actress Juni) and Jingu (played by Yu A-in), and the three grow up emotionally while building tight bonds with each other.

The film’s director, Oh Dal-kyun, is well known for this type of human story, particularly through his 2006 film “Heart Is.”

Jang’s character is a prodigy who has a gift for music, but she has the mental capacity of a 6 year old.

“It wasn’t easy for me to perform as a virtuoso violinist,” Jang said, adding that she underwent four months of intensive training to play the instrument adequately for her role.

Furthermore, she shed nearly eight kilograms (17.6 pounds) from her already light 45-kilogram frame for the part.

“I stopped eating meat, which I like, and opted for milk instead of rice to lose weight,” Jang added.

The character in Sky and Ocean represents a huge departure for Jang, who has developed a “cheerful girl” image through her roles in numerous TV dramas.

And that’s fine by her.

“I think the characters I play will change naturally as time goes by and I grow older,” the 28 year old said. “I plan to remain an actress for the rest of my life, so my current image doesn’t bother me.

“What I think is important is doing my best each and every time I do my work.”

Although the film hit local cinemas just yesterday, there has already been a fuss over Jang’s nomination for Best Actress at the 46th Daejong Film Awards, which opened Tuesday and is the oldest and most prestigious film contest in the country.

When her nomination was announced last week, a number of movie fans and some critics questioned the selection.

Jang’s movie, they emphasized, was not yet playing in theaters when she was nominated for the award, while actress Ha Ji-won - who starred in the box-office hits “Haeundae” and “Closer to Heaven” -was excluded from the list entirely.

Some bloggers even speculated that there seems to have been some backdoor dealings between the event organizer and people associated with Sky and Ocean.

Ju Ho-sung, Jang’s father and manager and the producer of the film, vigorously denies those accusations.

“It is a groundless rumor damaging our film, for which we have worked so hard,” Ju Ho-sung said in a recent posting on Jang’s official Web site.

“We submitted the film to the Daejong Awards in accordance with the event’s rules and passed the preliminaries through an impartial screening as far as I know.”

The Daejong event organizers also refuted the criticism, saying in a recent press release that “Sky and Ocean was completed within the designated time period to be considered for the awards.”

Final winners in 19 categories of the Daejong Film Awards, including Best Film, Best Director and Best Actor, will be chosen by a jury consisting of 10 film professionals and about 50 moviegoers.

The award ceremony will be held on Nov. 6, which is the final day of the event.