Having the measure of a president

Having the measure of a president 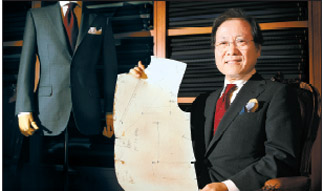 Yun In-jung, who was Park’s tailor for years, said Park was a frugal man who preferred domestic fabric to overseas textiles for his clothes. [JoongAng Ilbo]

A dozen pieces of faded, discolored paper enjoy special status at Segi Tailor in Sogong-dong, Seoul. They are paper cut-outs of important people. One of them is of former President Park Chung Hee.

Yun In-jung, 65, was Park’s tailor for years. For that reason, Yun got closer to the president than a lot of other people did.

Park ordered one or two suits every year. He insisted on using Korean fabrics, which was in contrast to the preferences of his peers. Among bureaucrats at the time, it was fashionable to use fabrics from overseas. They tended to be of better quality, more finely textured and smoother than Korean fabrics.

On one occasion, Yun had to lie. President Park had to wear an evening coat to greet then U.S. President Jimmy Carter during a visit in 1979. Back then, only fabrics from overseas were suitable for an evening coat. Yun took a piece of fabric labeled “Made in England” to the Blue House. Knowing that it would upset the president, a senior official made Yun take the label off before presenting it to Park.

According to Yun, Park preferred navy blue and dark gray. He liked his jackets to be a tad shorter than usual because of his height.

Yun is a witness to Park’s lifelong frugality. “The president’s house was often dark because he only had a desk light on. We had to choose our cloth near the windows,” Yun reminisced.

After Park had surgery on his nose for a chronic nasal condition, his waist measurement increased. Yun got an order to adjust five of Park’s suits. The linings were so worn out Yun felt it would be better to use new cloth, but Yun said the president disagreed.

Yun says that he got to know Park as a man and not a politician. “The president I knew was a genuine and simple man. There were a lot of humane sides to him.”