Looking for a miracle in Germany

Looking for a miracle in Germany 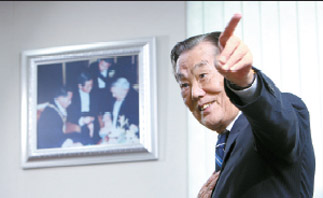 “This is a sad picture,” said Paik Young-hoon, the director of Korea Industrial Development. He was pointing at a faded photo.

The photo was taken in West Germany in 1964. It shows Korea’s former President Park Chung Hee meeting with Ludwig Erhard (1897-1977), the chancellor at the time.

Park is explaining something with his hand reaching out. Erhard is seated straight with a stern face.

Why is this picture making the 79-year-old Paik so emotional?

Paik accompanied Park on the trip to West Germany as an interpreter and economic adviser. Paik obtained his doctoral degree in economics at the University of Erlangen-Nuremberg. That and his knowledge of Germany got him a position in Park’s administration. He spent 15 years working as an adviser to the former president on his economic development plans.

“It was on that visit that I really saw the humane side of President Park,” Paik said with a wistful look.

Park visited West Germany to raise funds. He had many economic revival plans, but didn’t have enough capital to set them in motion. The president thought that Erhard, deemed the father of Germany’s economic miracle, would understand and perhaps finance his reforms and industrialization plans. According to Paik, the Korean president said: “Soldiers don’t lie. You can trust me and lend us money.”

Paik gave a speech to Korean miners on the trip, and, seeing his countrymen covered in coal dust and sweat, Park welled up. “Looking at you like this, I shed bitter tears. Let us all work hard and build a better, wealthier country.”