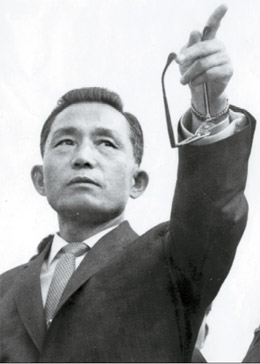 Thirty years have passed since former Korean President Park Chung Hee was assassinated, but he remains a highly controversial figure.

One is that of a ruthless military general who liked guns and led a bloody coup d’etat. The other is of a man who sought to escape poverty and spent time with ordinary people drinking makgeolli, the Korean rice wine long popular among tired and hungry farmers.

It’s been 30 years since he died. And historians still debate which of Park’s faces Koreans should embrace.

Park believed a revolution was inevitable in order for Korea to recover from the lasting effects of the war. 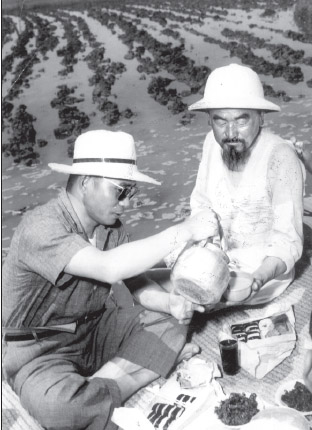 Makgeolli, traditional Korean rice wine, was one of Park’s favorite alcoholic beverages, and he would often drink it with farmers. [JoongAng Ilbo]

The instrument of Park’s revolution was his prolonged period of authoritarian rule. The people or things that got in the way were seen as obstacles and he was quick and merciless in getting rid of them.

Although many are critical of Park, there are some who argue that his actions were done not for his own benefit, but for the good of the nation.

It is true that most Koreans lived in dire poverty from the 1960s to 1970s and that after Park’s massive economic revival movement, many Koreans found themselves living in better conditions.

It is also true that although he was a dictator, Park and his wife, Yuk Young-soo, did not live in luxurious conditions. Rather, the Park family had flyflaps (for swatting insects) and bricks in the toilets to conserve water. They didn’t use an air conditioner, but left their windows open in summer.

Park may have led a frugal life, but many people died as he continued his relentless pursuit of his beliefs.

One of the most well-known incidents is the Yun Pil-yong Incident of 1973. Yun, then the capital garrison commander, was Park’s long-time confidant and one of the key figures in his administration.

Park heard that Yun had begun talking to Lee Hu-Rak, director of the Korea Central Intelligence Agency, about finding a successor for Park.

Yun had become a threat. And Park was not about to leave things at that.

Yun and many others were taken to the Defense Security Command and tortured. Later, they were either sent to jail or forced to quit.

Park maintained his power through the Yusin Constitution, which essentially extended his rule indefinitely. It increased the presidential term and put no limits on re-election and transferred the election of the president to an electoral college.

Park used the KCIA, DSC, the prosecution and police to stay in power and clamp down on any possible threats. The organizations were notorious for suppressing freedom of speech and the press during Park’s rule.

Few escaped these repressive policies, including artists. Korean-German composer Yun Isang (1917-1995), for one, was abducted, tried for treason and sentenced to life in prison for befriending North Koreans.

However, Park’s authoritarian actions led him to become increasingly unpopular and people began demonstrating against him.

Five years after the Yusin Constitution had been implemented, Park was shot by Kim Jae-gyu, the director of the KCIA, on Oct. 26, 1979.

Friend to the common people

Park often shared this incident from his childhood, which is illustrative of the conditions that may have led him to lead such a spartan life: “I was a sixth-grader at Gumi Elementary School. It was the eve of Chuseok [the fall harvest holiday], and school had finished early. When I entered my village, there was the smell of all kinds of delicious, holiday food. But when I arrived at my house, there was no smell of any food. In fact, there was no food whatsoever. I can never forget how I felt that day.”

Park is known to have drunk Chivas Regal in his final years. But his favorite drink was makgeolli.

“I think makgeolli had special meaning for Park, who grew up in a farming village, because it has long been something that has appeased the hunger of farmers,” said Kim Jeong-ryeom, a former chief of staff.

Most of Park’s belongings - suits, shirts, belts, shoes, cigarettes - were made in Korea, according to those who worked with him. But he did have three foreign products among his possessions - a pen, a tie and an electric shaver. He used a Parker pen to stimulate Korean pen makers; a foreign-made tie because the knots on Korean ties often came untied; and an electric shaver from overseas because there weren’t any Korean ones back then.

A doctor who saw Park when he was brought to the hospital after he was shot said that he couldn’t believe his patient was the president because the gilt on his tiepin had worn off and his belt showed signs of wear.

Park is known to have liked spending time with farmers, factory girls and “Ms. Bus Guides,” who were in charge of collecting bus fares and alerting bus drivers to stop for passengers in the 1960s and ’70s. Upon meeting one female factory worker who said it was her wish to learn, Park ordered the factory to set up a night school for its workers.

Ironically, the late president cherished labor, but under his leadership, labor rights were less than a cherished value.