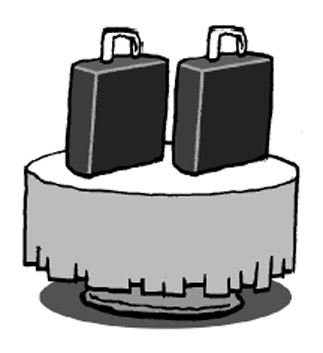 On July 9, 1971, United States National Security Adviser Henry Kissinger was visiting the Pakistani city of Rawalpindi, when all of a sudden, he disappeared.

The scheduled dinner with President Yahya Khan of Pakistan was also canceled. According to an official announcement, he unexpectedly developed an acute stomach problem and had to get medical care for two days at a rest area about 80 kilometers (50 miles) away from the city. Kissinger was seen again in Rawalpindi on July 11. Not long after his return, he left the country for his next destination.

The truth behind Kissinger’s absence from Rawalpindi was disclosed five days after that. President Richard Nixon made a special announcement that Kissinger secretly left Pakistan to visit Beijing and held talks with Chinese Premier Zhou Enlai during the visit. The Nixon-Mao Zedong meeting that opened up the bamboo curtain was the product of Kissinger’s secret envoy diplomacy, a stunt resembling a James Bond movie.

In March 2000, a man dressed like a tourist stood at the immigration counter at the airport. When the immigration officer recognized him, the man asked politely, “Please do not report to your superior that I am here, since I am going on a private holiday.”

In reality, Minister Park was taking part in an elaborate plan to set up the first South-North Summit Meeting in 2000.

Hitoshi Tanaka, who became the chief of the Asia-Oceania Bureau of the Japanese Foreign Ministry in Sept. 2001, went abroad every weekend but came to the office on Mondays as usual, as if there was nothing out of the ordinary going on. He kept this schedule up for nearly a year.

It was in September of the following year, when Prime Minister Junichiro Koizumi’s Pyongyang visit was announced, that the truth behind his “weekend activity” was revealed. He had met with a secret North Korean envoy over 30 times in a third country to discuss matters related to a summit meeting between North Korea and Japan.

The above are the examples that show how tightly the security of secret envoy diplomacy should be kept. Moreover, the identity of the North Korean secret envoy, who is called Mr. X, is still shrouded in mystery.

Recently it came out that envoys from the North and South met secretly in a third country to discuss a summit meeting between the two Koreas. This revelation came at an early stage in the discussions. The government, which denied the discussion on a summit meeting despite rampant rumors and circumstantial evidence, is in an awkward position.

Although the identity of Seoul’s secret envoy is not known yet, it seems only a matter of time that it is revealed, judging from the government’s previous security standards.