The pain and anguish of abandonment

The pain and anguish of abandonment 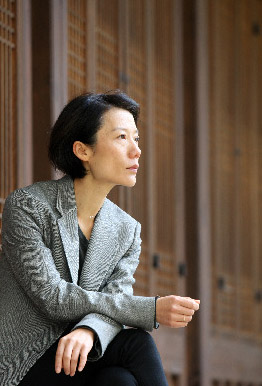 Jin-hee is enjoying a lovely day with her father, who surprises her in the morning with new clothes before taking her on a pleasant bike ride. But it turns out this is just his way of saying goodbye before he drops her off at an orphanage. Bewildered, Jin-hee stubbornly resists her new life and tries to escape from the situation, to no avail.

Eventually, Jin-hee succumbs to the reality that her father is not coming back, and she is forced to adapt once again after being adopted by a couple who lives in a foreign country.

This is the synopsis of “A Brand New Life,” a film that explores the pain and suffering that accompanies being abandoned by those you trust and love. The movie, now in theaters, pulls at the heartstrings of audiences, but it’s all the more poignant because parts of the story are based on the director’s own experiences. Ounie Lecomte, 43, was adopted in Korea by a couple living in France when she was nine years old after spending a year at an orphanage.

In a recent interview with the JoongAng Ilbo, the director said her life and her debut feature film should be regarded separately, though she admitted that her experiences growing up made the film more convincing. Following are excerpts from the interview.


Q. Do you remember much about your childhood in Korea in the 1970s?

A. I don’t have specific memories in my mind. For things such as the type of haircut that children at an orphanage got at the time - which offers insight into the period - I consulted historical information. I also got some help from Korean staff I worked with.

However, I don’t think a memory needs to be a “fact.” I think Korea, in general, has always been in my mind.


What did you want to say in the film?

I wanted to portray people who live on with a wounded heart without ever getting the answers they seek.

In the 1970s, when I was adopted and moved to France, many Korean children were abandoned by their parents not only for economic reasons, but also for other reasons like divorce or remarriage. Many children in this situation never get an explanation of why they were abandoned. They have to deal with it, whether they like it or not.

The selection of songs in the movie, including “Spring in My Hometown” and “You’ll Never Know,” is impressive. How did you choose them?

My adoption papers say that I liked the song Spring in My Hometown, though I don’t remember its lyrics or melody. You’ll Never Know was the idea of Lee Jeong-hwa, the scriptwriter of the film. It was a song from the 1970s, when the movie is set, and its lyrics actually match well to the story of Jin-hee, who undergoes a heartbreaking parting from her father and misses him so much.