Renaissance by the riverside

Renaissance by the riverside

Watch out for the giant inchworm on the banks of the Han River. The silvery worm is 240 meters (787 feet) long, and it looks like it’s just landed from outer space. No need to worry, though. The worm is very friendly.

The “worm” is actually an observation deck connected to Ttukseom Resort Station. When it opens in mid-November, it will have a book cafe, a gallery, a restaurant and an observation deck, in a space covering 1,931 square meters (20,784 square feet).

This is the latest development in the ongoing Han River Renaissance Project to enhance riverside recreation areas and revive the river’s natural ecology.

The riverside parks in Ttukseom, Nanji and Yeouido reopened after almost two years of renovation, and completion of the worm-like observation deck is the last part of the project. After the parks reopened late last month, the Seoul city government said attendance was in the millions. 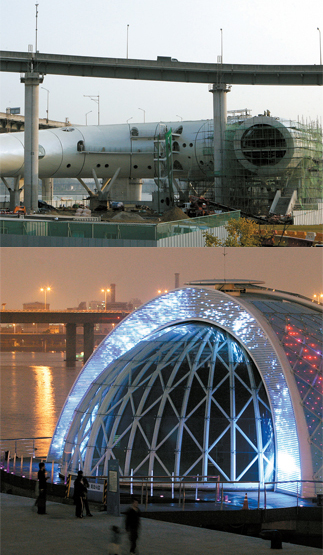 Top to above: This worm-like observation deck will open at Ttukseom Riverside Park in the middle of next month. By Jeon Min-kyu;The doors of the Floating Stage on Yeouido close when the weather turns cold to provide space for a cafe.

New attractions include the Floating Stage, Cascade and Piano Waterway on Yeouido, as well as the Music Fountain and Riverside Plaza in Ttukseom. New facilities include not only new bike and walking paths but also convenience stores, cafes, observation decks and public restrooms. The stores are especially pleasant, with terraces where people can sit, relax and enjoy the view of the Han River.

The renovation project will continue in other riverside parks in the Ichon, Yanghwa and Jamsil areas and will be completed by 2011.

Ttukseom has long been a place where people go for recreation. In the summer, groups of children play in the shallow water and young people lounge under parasols as they take in the river breeze. The place is still loved by many people, and the water park that opened here last summer has seen especially high attendance.

The observation deck, called Jabeole in Korean, which looks like a gigantic squirming worm, is perhaps the biggest attraction at Ttukseom. It is located right below Cheongdam Bridge over the Han River. It will house a cafe on its fourth floor and a restaurant on the third floor. The second floor will host a media art exhibition when it opens in mid-November. 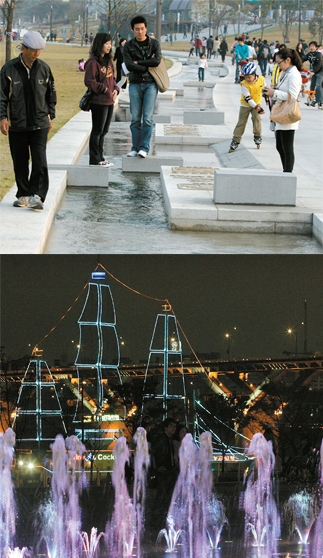 The Cascade on Yeouido, above, stretches out over the water, and the playground, below, lights up the night.

Nearby, there is a playground that is sure to inspire the child in everyone. It has a pirate ship chasing after a whale, and the structures contain a mixture of jungle gyms and slides for children of all ages.

“We heard about the playground so we brought our children,” said Baek Hee-cheol, a teacher from Wido Middle School in Buan County, North Jeolla.

All 24 children from the middle school were on a three-day trip to Seoul to see the city. “The playground has beautiful colors as well,” he added.

The area also has a park where people can go skateboarding and in-line skating. Visitors can also rent four-person paddleboats for 40 minutes for 13,000 won ($11). 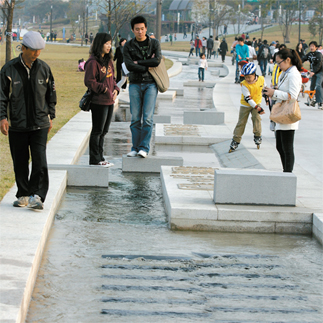 The Piano Waterway in Yeouido Riverside Park was designed to resemble the Han River.

To reach Ttukseom Riverside Park, go to Ttukseom Resort Station, line No. 7, exits 2 and 3. Parking is available for 3,000 won per day. For more information, call the Ttukseom Hangang Park Information Center at (02) 3780-0521 or visit http://hangang.seoul.go.kr/eng/.

There used to be vast white sand beaches around Yeouido. The area was so flat and wide that it once supported an airport, the first in Korea. The first pilot in Korean history, An Chang-nam, made his first flight from the airport in 1922 with 50,000 people, or one-sixth of the population of Seoul, watching from the surrounding beaches. The airport was built in 1916 and closed in 1971.

Today, the airport and the beaches are gone, but there are other amusements, including the Cascade, the Floating Stage and a water park.

The Cascade is a mixture of waterfalls, shallow pools and fountains. The pools are only 30 centimeters (11 inches) deep and children can play in them without worrying about going underwater. The water from the pools flows slowly down to the river. In the past, it was difficult to go down to the water’s edge because of the high bank, but the Cascade’s gentle decline allows people to get closer to the water than ever.

“It used be a plain grass field but now it has a friendlier atmosphere,” said Kim Chang-gyu from Daebang-dong, southern Seoul. “Beside that, it is now possible to go down to the water’s edge. The Han River is more accessible.”

The Floating Stage is the first of its kind in the world with doors that open, according to Seoul city. It was designed to look like a water droplet and the exterior is covered with LED (light-emitting diode) panels that change color depending on the weather. When it gets cold, the doors close and the stage turns into a cafe.

Yeouido also has a 415-meter-long creek called Piano Waterway that symbolizes the Han River, which is 41.5 kilometers long. The creek flows from near Yeouinaru Station to the cascade. The stones laid along the waterway look like piano keys and give the attraction its name.

The riverside park in Nanji near the World Cup Stadium was once difficult to reach because it was far from the subway station. Now, there is a shuttle bus that goes to the park via the new bridge between Nanji Riverside Park and Sky Park, making the site more accessible.

One of the biggest attractions here is the water playground, which, unlike other water playgrounds in Seoul, is located right by the river. The area is filled with white sand, adding to the feeling that it is really a beach. The atmosphere here is peaceful, and sitting on the bench while gazing at the water playground invokes a feeling of serenity.

From the water playground, there is a long reed field that stretches to the west. There are also marshlands covering 33,600 square meters along the way and wooden bridges over little creeks flowing to the river. Though the marshlands are man-made, they contribute to the park’s natural environment and look most beautiful at sunset.

The park also includes a large campground that can accommodate up to 970 people. Campers can either rent a tent or bring their own. It costs 15,000 won for a family of four bringing their own tent. For more information, call (02) 304-0061~3 or visit www.nanjicamping.co.kr.

To reach Nanji Riverside Park, go to Sangam World Cup Station on line No. 6, exit 1, and take bus No. 8776 from the south gate of the World Cup Stadium. Bicycles are available in front of the south gate for up to six hours. It is free for the first two hours and 1,000 won for each additional hour. For more information, call the Nanji Hangang Park Information Center at (02) 3780-0611 or visit http://hangang.seoul.go.kr/eng/.