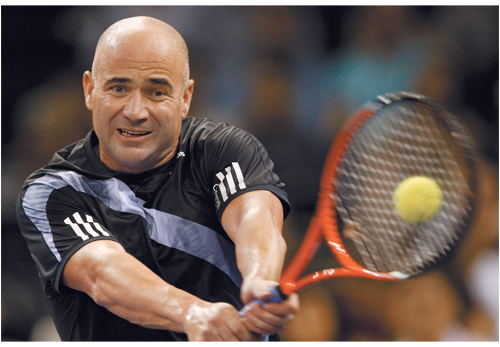 Andre Agassi returns the ball to Pete Sampras during a friendly exhibition at the Venetian Hotel in Macau, on Oct. 25. The two American tennis greats revisited one of the sport’s greatest rivalries from the 1990s. They last played in the U.S. Open final in 2002. [AP]

DOHA - Eight-times grand slam winner Andre Agassi left the tennis world in a state of shock on Wednesday when he admitted using the recreational drug crystal meth and lying to men’s governing body the ATP to escape a ban.

In his autobiography “Open,” the American candidly describes being introduced to the drug in 1997 and the moment when he was informed he had failed a drugs test. International Tennis Federation (ITF) President Francesco Ricci Bitti said he was “surprised and disappointed” by the revelations and World Anti-Doping Agency (WADA) chief John Fahey called on the ATP to “shed light” on the circumstances that allowed Agassi to escape punishment.

In his book, Agassi, now 39, spoke of the moment he took crystal meth, a highly-addictive amphetamine, for the first time when his career was in freefall. He was helped by his drug-user assistant, known as Slim.

“Slim dumps a small pile of powder on the coffee table. He cuts it, snorts it. He cuts it again. I snort some. I ease back on the couch and consider the Rubicon I’ve crossed,” he said.

“There is a moment of regret, followed by vast sadness. Then comes a tidal wave of euphoria that sweeps away every negative thought in my head. I’ve never felt so alive, so hopeful - and I’ve never felt such energy.”

Agassi burst on to the scene in the late 1980s with a maverick streak, long hair and a wacky dress sense that made him an instant hit with a new generation of tennis fans. He won Wimbledon in 1992, the U.S. Open in 1994 and the Australian Open in 1995.

However, wrist injuries and a loss of form sent his career on to the rocks in 1997 and his world ranking tumbled to 122. A year later he began a new training regime that sparked an incredible turnaround. After a spell on the second-tier Challenger circuit he shot back up the rankings and in 1999 completed a career grand slam at the French Open.

Agassi, now married to former women’s No. 1 Steffi Graf with whom he has two children, ended 1999 atop the rankings after winning the U.S. Open again. He won three more Australian Open titles before a tearful retirement in 2006.

However, had tennis’s doping program been under the WADA code at the time there is little doubt his cover-up of his drug-taking would have failed and his career could have been ruined. Agassi, in extracts from his book serialized in the Times, remembers receiving a phone call in 1997 from a doctor working for the ATP who informed him that he had failed a drugs test.

“My name, my career, everything is now on the line. Whatever I’ve achieved, whatever I’ve worked for, might soon mean nothing. Days later I sit with a legal pad in my lap and write a letter to the ATP. It’s filled with lies interwoven with bits of truth,” Agassi said.

He said the ATP threw out the case against him after he concocted a story that he had accidentally drunk a soda spiked with crystal meth belonging to Slim.

Agassi’s admission that he took drugs casts a shadow over a player widely regarded as one of the greatest ever while it also exposes the ATP’s lack of strict doping controls at the time.

“This is a very serious statement which, if reported accurately, is one that is disappointing coming from a role model such as Andre Agassi,” Fahey said.

The ITF has been responsible for the ATP Tour’s anti-doping program since 2006 and the women’s WTA Tour a year later. “The ITF is surprised and disappointed by the remarks made by Andre Agassi in his biography admitting substance abuse in 1997,” Ricci Bitti said in a statement.

“The events in question occurred before the World Anti-Doping Agency was founded in 1999 and during the formative years of anti-doping in tennis when the program was managed by individual governing bodies.”

Agassi said he was not worried about the impact of his revelations. “I was worried for a moment, but not for long,” he told People magazine’s Web site. “I wore my heart on my sleeve and my emotions were always written on my face. I was actually excited about telling the world the whole story.” Reuters