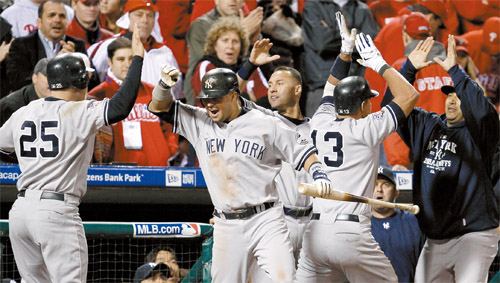 The New York Yankees’ Mark Teixeira (25) and Alex Rodriguez (13) celebrate after scoring on Jorge Posada’s two-run RBI single against Philadelphia Phillies’ Brad Lidge during the ninth inning of Game 4 of the Major League Baseball World Series on Sunday in Philadelphia. The Yankees defeated the Phillies 7-4 to take a 3-1 lead in the series. [AP]