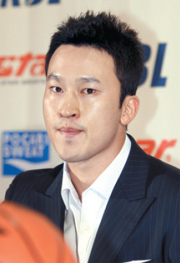 The Daegu Orions got their wish: KBL officials have decided to cut Kim Seung-hyun’s suspension in half.

Daegu’s star point guard will return to the court on Saturday against KCC Egis in Jeonju, North Jeolla.

KBL’s governing body decided to reduce the 18-game suspension to nine games at the KBL headquarters in Nonhyeon-dong, southern Seoul on Monday evening.

The 31-year-old has been serving his suspension since the start of the season for the double contract fiasco during the offseason.

Kim and Orions’ officials could not reach an agreement in their contract negotiations and Kim came public with the fact that he had signed a dual contract with his club. He claimed that there was one contract submitted to the league and then a secret contract he signed with the team saying that he would be paid more money than in the official contract.

It caused a stir in the basketball world as it was the first time that a player came forward and discussed such matters in public. The dispute between the two sides got to the point where both sides seemed to suggest that parting ways was the only reasonable solution left.

However, when the media coverage intensified on the issue and KBL stated it would step in to settle the matter, Orions’ director of operations Shin Yong-seob and Kim held a press conference at which they retracted their previous statements. They both stated that the double contract did not exist, drawing irate reactions from basketball fans.

“The fines have been paid and we have decided to reduce the length of Kim’s suspension in half,” a KBL official was quoted as saying to Yonhap. “We also took into consideration the fact that Kim has been apologetic about the incident and the affect of Kim’s suspension can have on the Orions.”

Most basketball fans were angry with Orions’s officials for claiming that the suspension was too harsh, especially since the season is still in its infancy, but other officials around the league lent their support.

These officials have already taken a lot of flak for too much leniency over the punishment for Kim and his team and the latest decision is expected to add to the perception that KBL officials are not tough enough on their teams and players.

While some basketball fans posted positive remarks about Kim’s shortened suspension on the search portal Naver, others left disparaging remarks.

“Orions could suffer from a lengthy suspension but there is a need to teach a player like Kim a lesson. I wonder what kind of remarks he will hear from the crowds once he makes his return,” one fan said on the site.

KBL has failed to collect most of the heavy fines it has handed out over the years and it has retracted on lengthy suspensions to its domestic players.

Kim’s return is expected to be a big help to the Orions who currently hold a record of two wins and six losses. The Orions have been averaging 77.25 points per game so far, the lowest total among the 10 KBL teams. While Kim has missed a considerable number of games over the past two seasons due to back pain, he is said to be in good shape.

“We took an MRI before the start of the season and the problematic area in his back has improved drastically. The pain in his back is nearly gone,” said Yoon Yoo-rang, a coach on Orions’ staff.