An advanced type of art to inspire the Internet age

An advanced type of art to inspire the Internet age 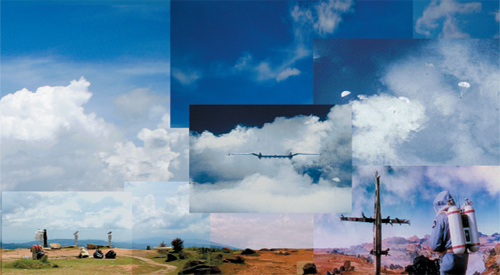 In recent years, there’s been a growing appreciation and awareness by the general public of media art, which refers to works that incorporate video, computer graphics, interactive elements, robotics and other advanced technologies.

But this artistic genre is just getting started, and there seems to be no limit to its potential.

“There weren’t many exhibitions that focused on the works of Korean media artists,” said Yang Chan-je, a senior curator at Gallery Hyundai. “This shows new and old pieces by the artists as well as works they’ve done that were only introduced abroad.”

The art on display incorporates a variety of technologies and runs across numerous themes.

A piece by Oh titled “Memory of the Future” is a video collage composed of different scenes from feature films and footage he shot himself. One segment features a UFO zipping around the sky while an alien below walks around a city. Oh wanted to create a multidimensional piece by combining various images and scenes, Yang said.

“Una Lumino” by Choe looks like a giant chandelier made of flowers - except for the fact that the flowers move. The piece, featured in a 2008 exhibition at SCAI The Bathhouse, a Tokyo gallery - has garnered a great deal of attention from the media.

“This living entity [the flowers] has the same form and movement as that of a barnacle, which in my imagination breathes in energy by opening and closing its mouth,” Choe wrote for the exhibition.

Moon’s “Sungnyemun” seemingly tells the story of the Namdaemun gate, which is now under restoration after it burned down in February 2008. The image of the gate dissolves into bright dots that regroup again to form the structure over and over.

In a piece of video art titled “Parking,” Park shows hands moving quickly to replace cars in a parking lot. The cars and people in the video look as if they are toys being manipulated by the hands. Another piece titled “The Occupation 2” also features hands, which repeatedly prop up a wall of a building.