Wild romp to Disneyland, on ice

Wild romp to Disneyland, on ice 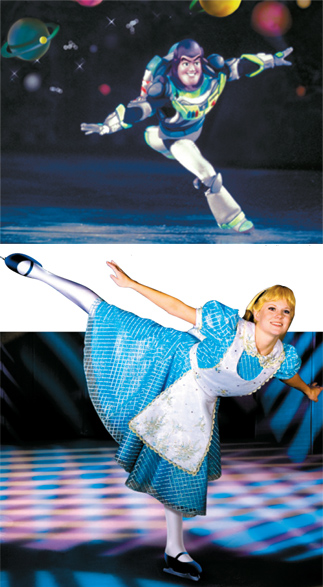 “Disney On Ice: Disneyland Adventure,” will be presented at two locations in the Seoul metro area in December. Provided by Mast Entertainment

This winter, Santa Claus is not the only one coming to town. “Disney On Ice: Disneyland Adventure,” an ice skating show produced by Feld Entertainment that has been touring the world, will be presented in Korea in December.

So far, more than 300 billion people in 54 different countries have watched the show. There are eight productions currently touring Europe, Australia, South America, the Middle East and Asia.

He believes that this show is reminiscent of Disney theme park experiences and that the crowd can create their own new memories as Mickey and his friends glide across the ice.

“Each show moment takes audiences to lands beyond their imagination just like they remember from the parks,” Feld said in a press release.

The show features many characters that die-hard Disney fans are sure to remember: Mickey and Minnie Mouse, Donald and Daisy Duck, Goofy and Pluto. They all hit the road for a vacation to Disneyland. But their journey gets interrupted when the evil fairy Maleficent summons her powers to put the Magic Kingdom under a sleeping spell. For help, Mickey calls on the superhero family the Incredibles, whose antics eventually save the day.

The show draws on several Disney classics to fill out its story line, including “Snow White and the Seven Dwarfs,” “Cinderella” and “Pirates of the Caribbean.”

It was directed by Patty Vincent, who was a performer with Disney On Ice for nine years before stepping in as a director. She also directed the shows “Finding Nemo” and “Princess Wishes” for the Disney On Ice franchise.

The cast includes 50 figure skaters, some of whom once competed on the amateur circuit. Other members of the creative team include costume designer Scott Lane, choreographer Cindy Stuart and lighting designer Peter Morse.

Feld Entertainment, which owns the Ringling Brothers and Barnum & Bailey Circus, paid Disney a fee for the right to use its characters and stories and began touring shows around the United States. Later, Feld hit international markets like Japan and Korea.

Disney On Ice started in 1981 as another of the company’s many licensed products, and Disneyland Adventure is the 26th Disney On Ice show. Other versions of it include 2004’s “Disney Ice Show” and 2005’s “Jungle Adventures,” both of which have been presented in Korea to appreciative audiences.

Feld Entertainment is confident that this show will “make the hairs on the back of your neck stand up.” For some, that could even rival the thrill of seeing Santa Claus.