Volunteers look back at Korea’s past

Volunteers look back at Korea’s past 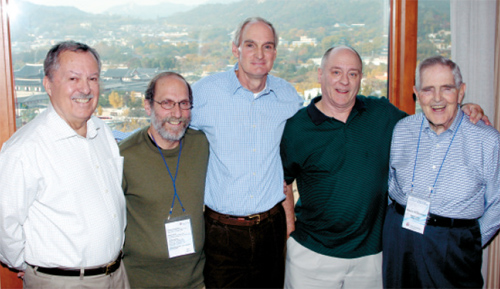 Nearly 50 years ago, U.S. President John F. Kennedy issued a clarion call to the people of America, challenging them to put the interests of the country - and indeed the world - ahead of their own.

“And so my fellow Americans, ask not what your country can do for you; ask what you can do for your country,” Kennedy said, wrapping up his historic inaugural address in 1961 with a line most people from the United States can recite to this day.

Many younger Americans took him up on that challenge, volunteering to promote the country’s values and help struggling people in developing countries through a new organization called the Peace Corps. Some of them wound up in Korea, where they not only benefitted from a life-changing experience but also got a front-row seat as the country began shifting from a war-torn land suspicious of outsiders into an advanced economic powerhouse that vaulted to the global stage in record time.

Last week, dozens of Peace Corps volunteers who served in Korea during the 1960s and 1970s gathered with their family members for a weeklong, government-sponsored reunion in Seoul, the third of its kind over the past year. Their stories provide a glimpse into Korea’s not-too-distant past and show how Kennedy’s words inspired a generation of Americans to focus on a greater good.

“Before I came to Korea, I had never left America,” said Bill Harwood, who moved here from Connecticut in 1975 and taught English at Kaesung Boys Middle School in Busan for two years. “I was just a small boy from a small state. Coming to Korea opened my eyes to the world. I think we as volunteers gained as much or even more than we gave.”

Shortly after taking office, Kennedy signed an executive order officially creating the Peace Corps, a government-run volunteer program that aims to help American youth serve their country in the cause of peace by living and working in developing countries.

The organization eventually expanded into Korea, and more than 1,800 volunteers served here from 1966 to 1981. Volunteers helped the country move past the ravages of the Korean War (1950-1953) by providing public health care, English education and other services. 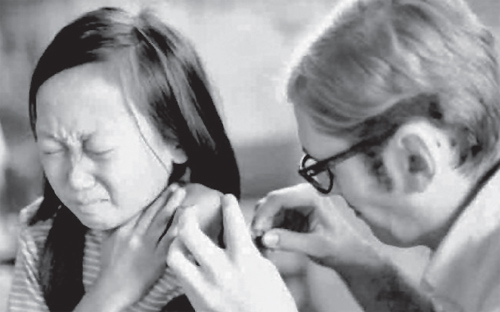 A girl receives a tuberculosis vaccination at a middle school in Seoul in 1972. At the time, there were many tuberculosis patients around the country.

Those who came here with the Peace Corps saw a very different Korea, one that seems eons removed from the vibrant, technologically advanced and prosperous country it is today.

Harwood has a specific memory related to censorship under the military dictatorship here at the time.

“My parents in America sent me Time magazine every month at the time, but I often found that the magazine had pages torn out, which means that it was censored by the Korean government,” Harwood said. “Any time that anything about Korea was mentioned in the magazine, I’d find sections blacked out with marker or the page was just torn off completely, which made me angry. So I used to go to the American army base where I could buy the whole copy and I brought it to my school and let everyone read it, which was my kind of ‘statement.’”

Jerome and Barrie-Lynn Raik got more than they bargained for when they came here from New York as Peace Corps volunteers in 1967 shortly after getting married when they were 20 years old. The couple landed in Yecheon County, North Gyeongsang, where they taught Korean students English and received a crash-course in how the locals lived.

“There were only two paved streets and two cars in the entire village of Yecheon in the late 1970s when we lived there, and no building had more than two stories,” Jerome Raik said. 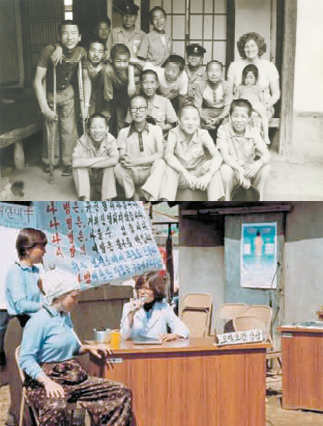 Top: U.S. Ambassador to Korea Kathleen Stephens poses with Yesan Middle School students in South Chungcheong during her stint here as a Peace Corps volunteer in the mid-1970s. Above: Peace Corps volunteers participate in a health education program at a village in South Gyeongsang in 1981.

“We lived in a thatched-roof house, which you can’t really find in Korea now, and we used to wash clothes in a stream.”

The couple lived in some cramped quarters.

“There were a total of 14, including the two of us, living in the house, yet there were only three sleeping rooms and one of those was all ours, meaning the other 12 people shared the other two rooms,” he said. “The hospitality was great, which amazed us.”

To put it in perspective, today you’d be hard-pressed to find that many people living under one roof in such a small home.

The couple visited Yecheon 11 years ago for the first time since leaving Korea in 1969, bringing their children along as well. Jerome Raik said he was “shocked” at how the once-rural village had transformed into a big town.


How to save a life

The Raiks also got a unique glimpse into the quality of health care here at the time, which severely lagged behind that of developed countries.

Suk-hee, the 8-year-old daughter of the couple’s host family, had heart disease and needed surgery. When the couple’s Peace Corps term ended in 1969, the Raiks decided to take the girl with them to New York, where they believed she would have a better chance at receiving quality medical care.

“The hardest part of the process was getting her a passport, because in those days it was very difficult for Korean people to get a passport issued by the government,” Jerome Raik said. “The operation had been performed three or four times in Korea at the time, but no one had survived. The hospital in New York that we took Suk-hee to was performing the operation six or seven times a week and everyone survived.?.?. so there was no question that we thought it best to take her to New York for it.”

It turned out to be the right move, as the operation was a success. “She is now living in Gimhae and we met her during this visit,” he said last week. “We were happy to see her having a wonderful life now with her husband and two children, running a music school.” 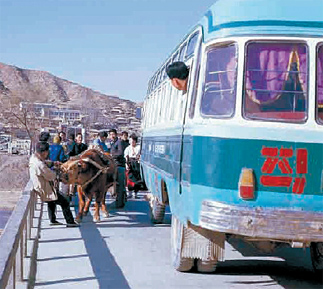 A street scene in Andong, North Gyeongsang, in 1966.

The experience also had a lasting impact on Barrie-Lynn Raik, who eventually became a doctor and is currently a professor of clinical medicine and clinical public health at Weill Cornell Medical College in New York.

“Barrie had no idea that she would become a doctor before that,” Jerome Raik said. “Suk-hee had these two women cardiologists - in their 50s and 30s, respectively - [in the New York hospital], and they took such good care of her. These smart, confident women who did this wonderful thing were a big part of the inspiration behind Barrie’s decision to become a doctor.”

Jon Keeton, who served as the director of Peace Corps for Korea from 1973 to 1976, said the couple’s story is quite common.

“Tuberculosis was a very big problem in Korea in the ’60s and ’70s because Korea didn’t have a proper system to deal with it,” he said. “Basically, what volunteers did was they went around visiting and collecting spit samples. They collected thousands of these samples, trying to find people who had TB. Then, when they finished their service, quite a few became doctors. They were inspired by the difficult work they performed in the villages of Korea.”

“When we came here in the 1970s, not many Koreans understood what volunteerism meant,” O’Donnell said. “They didn’t know why young American people like us came here, and there was even suspicion that this was part of the CIA and that we were spies or something. We even had to have a meeting with a Korean government official, who wanted to find out what we were doing and why.” 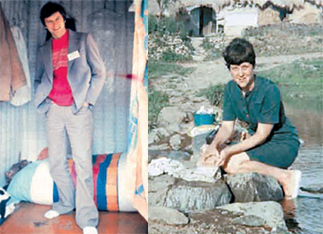 Left: “My room was so small that at night my head was against the back wall and my feet up against the rice paper door,” wrote Gerry Krzic, who served as a Peace Corps volunteer in Cheongju, North Chungcheong, in 1977. Right: Sue Brigham served with the Peace Corps in Deoksan, South Chungcheong, in 1968. “Women of the village wondered how a health worker could not know how to wash clothes in the stream on the rocks,” she wrote of her experience.

Now, however, thousands of Koreans are performing volunteer work in other countries, providing many of the same services that Americans offered here decades ago.

“When Kennedy started the Peace Corps, we as a nation were already 250 years old,” O’Donnell said. “It’s only been about 50 years since the end of the Korean War, and Korea has already picked up the concept of volunteerism and is now carrying it out, which I think is amazing.”

Aside from the Raiks, O’Donnell and others say their experiences here helped set the tone for the rest of their lives.

“When I was first interviewed by the Peace Corps I was given a couple of opportunities of where to go,” he said. “I picked Korea and I’ve never regretted it because it has completely changed my life and my children’s lives.” One of O’Donnell’s daughter served as a Peace Corps volunteer in Nepal, and one of his granddaughters is volunteering with the organization in Peru.

Many former Peace Corps members in Korea have dedicated their lives to foreign service. U.S. Ambassador to Korea Kathleen Stephens, for instance, was in the Peace Corps here in the mid-1970s.

“There’s a fair percentage - about 10 to 15 percent - of American diplomats who served in the Peace Corps,” said Richard Christenson, who came to Korea in 1967 as a Peace Corps volunteer and taught English at Jeil Middle School in Mokpo, South Jeolla. Christenson spent more than a third of his 35-year diplomatic career in Korea, including a deputy post at the U.S. Embassy in Seoul from 1996 to 2000.

Local officials are now hoping to keep the connection alive by organizing Peace Corps reunions - the first country to sponsor such an effort, officials say.

Keeton currently leads Friends of Korea, which was formed in 2000 to connect Peace Corps volunteers who served in Korea and to promote goodwill between the organization and the country. The group is now working with the Korean government, which plans to continue the reunions once or twice a year until at least 2013.

Along these lines, Friends of Korea recently published the book “Through Our Eyes: Peace Corps in Korea, 1966-1981,” which chronicles the experiences of volunteers and the transformation of the country in pictures.

“Aside from helping organize reunions, we have many ideas for the future,” Keeton said. “They include a mentoring program with the Korea International Cooperation Agency - which operates a similar program to the Peace Corps - or a fellowship program enabling volunteers to come back to Korea for volunteer work in their field of expertise for a year or two.”