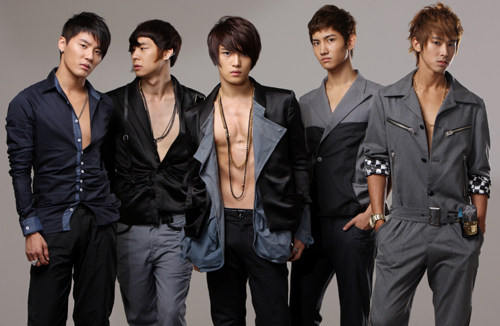 The ongoing legal feud between three of the five members of the popular boy band TVXQ and their management agency, S.M. Entertainment, has now entered a critical phase.

In a press conference held Monday, S.M. Entertainment issued an ultimatum to the three band members - Xiah Jun-su, Micky Yoo-chun and Hero Jae-joong - saying they must decide whether to return to their original contract by Nov. 12 or quit the band altogether. The management agency added that they would appeal a recent interim court ruling made in favor of the three band members for a provisional disposition, which temporarily terminates the exclusive contract between the group and the agency for the duration of the dispute.

In the dispute that started this summer, the three band members claimed their contract with the agency is akin to a lifelong agreement and is therefore unfair.

The other two band members - Max Chang-min and U-Know Yun-ho - spoke out against their bandmates for the first time through a written statement released by the agency at the Monday press conference.

“We think that TVXQ cannot exist anywhere but in S.M. Entertainment,” the statement said. “S.M. is the only agency that understands and can make TVXQ the best - it would be unthinkable for TVXQ to work under a different agency,” it added. “We hope that the three band members will return quickly so that we can perform together as TVXQ again.”