The stimulating cinema experience of films in 4-D

The stimulating cinema experience of films in 4-D 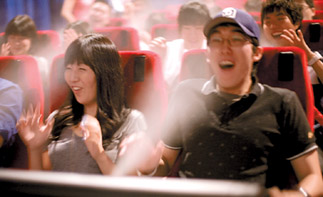 Moviegoers watch a 4-D film at CGV Sangam. The film is screened with special effects like seat vibration and smoke, which enhance the cinema-going experience. Provided by CGV

When a bloodthirsty felon kills people in a horror movie, a spray of water attacks your face as blood spatters on the screen. When a building collapses and a dust fog arises in a disaster movie, smoke comes out to envelop you. When a helicopter takes a downward plunge in a war movie, you can feel the shock as your seat shakes as well.

The future is here, and it’s four-dimensional. The examples mentioned above are just a few of the experiences you can expect when watching a 4-D film.

These films are already popular at amusement parks worldwide, including Disneyland and Universal Studios in Hollywood. Not wanting to be left behind, the local cinema industry is now gearing up to provide moviegoers here with the same experience.

Currently, the CGV Multiplex in Sangam-dong, western Seoul, is the only place in the city to see a 4-D film, but other CGV theaters in Yongsan, Yeongdeungpo and Gangbyeon also plan to add 4-D screens this year.

There are about 20 different 4-D effects. These fall into two main categories: action and atmosphere. Seat vibration is an example of the first category while water sprays, air jets, smoke and scents are in the second category. There are usually about 20 to 25 effects in a single full-length 4-D movie, which means that in a two-hour film, there are effects about once every five minutes.

“Rule No. 1 when you work on a 4-D film is that you should not prevent viewers from following the story by overusing the effects,” Oh Su-hee, one of the two 4-D programmers at CGV Sangam, said.

“For example, we originally made much use of the vibration effect for scenes where the tsunami blows into town in the movie ‘Haeundae,’ but we later cut out more than half the original amount after a test run,” said Oh. “A number of the people in the test audience complained that the frequent vibrations prevented them from concentrating on emotional scenes where the characters go through near-death experiences to realize how important they are to each other.”

A ticket for a 4-D movie costs around 12,000 won to 15,000 won ($10-12), which is about 50 percent more than admission to general movie screenings. However, about 90 percent of the seats for 4-D films are sold for weekend shows, and many of these are sold by ticket scalpers who charge three to four times more than the list price, the theater said.

While 4-D films certainly generate a lot of viewer enjoyment, they can be quite a grind for the programmers behind the scenes.

“We see a movie about 50 times, sometimes up to 80 times, to complete a piece of 4-D film,” Oh, the programmer, said. “So by the time I finish it, I feel numb, no matter how touching the movie is, and I sometimes fail to remember the story.”

But most of the time, Oh is rewarded for all of her hard work.

“I feel great about doing this job when I get good reviews from moviegoers, like the one I got after we screened the 4-D version of the slasher movie ‘My Bloody Valentine,’” she said. “We added special effects mixing steam and smoke for one of the massacre scenes in the movie, and many viewers told me later that they actually felt like they were smelling blood, which made me forget all the pain I had gone through while on the job.”