The Japan that can say no

The Japan that can say no

Twenty years ago in Japan, there was a bestselling book that was so popular they had to print 20 editions of it in one year. The fact that Shintaro Ishihara, a writer turned politician who became the governor of Tokyo, and Akio Morita, co-founder of the Sony Corporation, authored the book together was sensational enough. But the book’s title was what really caught the public’s attention: “The Japan That Can Say No.” 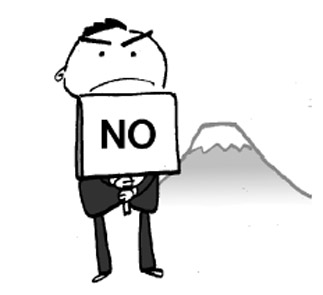 How can Japan say “no” to the United States, which once supervised the Asian country through the Allied Powers’ command under General Douglas MacArthur, and which has been safeguarding Japan’s security in lieu of its own military that is denied under the Peace Constitution?

In the book, the authors try to stimulate the dormant national pride of the Japanese people. For example, Ishihara said, “Semiconductor technology, which is essential for the United States in order to keep military superiority over the Soviet Union, is in Japan’s hands.”

Morita asserted, “American business focuses too much on money games like mergers and acquisitions, and not enough on creating real goods and manufacturing power. Japan is the only country that has creativity and know-how.”

The book was published right before the Japanese economy was pulled in the mire of the “lost decade.” It was when Japan’s economic bubble was at its height, and there was a prediction that Japan could become an economic superpower succeeding the United States, as China was yet to emerge as a potential economic force. It was an expression of self-confidence in Japan’s position that Ishihara and Morita urged to say “no” to the United States.

However, did the Japanese society move to the direction the two men pronounced? The answer to that question is also “no.”

Japan still concentrates all its effort on strengthening cooperative relations with the United States.

During the Clinton administration, when the relations between the United States and China got closer rapidly and so-called “Japan passing” or having direct talks between Washington and Beijing over the head of Tokyo took place, Japan even pleaded that the United States pay more attention to it, as well.

As the government changed this year for the first time in 54 years, a rare scene is taking place in Japanese politics now.

According to a newswire report, “It is the first time that Japan resisted against the United States in the past couple of decades.” More than 60 years after Japan surrendered to the Allied Powers, Japan opened its mouth and started to say “no.” I am curious to know whether it will expand the war or finally end it.