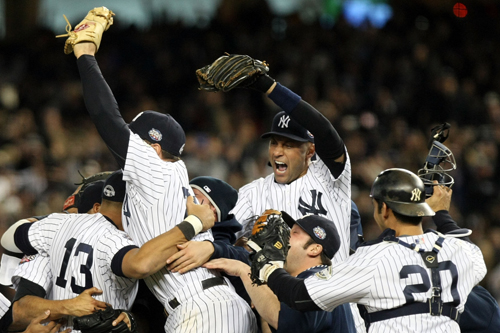 New York Yankees players celebrate after their 7-3 win against the Philadelphia Phillies on Nov. 4 in the sixth game of the 2009 MLB World Series at Yankee Stadium in New York City. [AFP]

The 35-year-old Japanese star drove in six runs on three hits, including his third home run in the best-of-seven final, and became the first Asian to win World Series Most Valuable Player honors as the Yankees defeated the Phillies four games to two.

“It’s awesome. It’s just unbelievable. I’m surprised myself,” Matsui said through a translator. “All I can say is I feel so happy right now. It feels great.”

The Yankees, with baseball’s largest payroll at $201 million, extended the greatest legacy of championship success in North American pro sports by claiming their first crown since 2000.

“It’s back where it belongs,” Yankees captain Derek Jeter said as he held the champions’ trophy above his head. “This one is special.”

Yankees designated hitter Matsui smashed a two-run homer to right field in the second inning and added a two-run single in the third and a two-run double in the fifth. Matsui matched the World Series one-game record for knocking in runs set by Yankees star Bobby Richardson in 1960. Matsui’s heroics came in what could be his final game in a Yankees uniform since he was not signed beyond this season, but he achieved his dream of capturing a World Series crown.

“I hope it works out for me. I love New York. I love the Yankees,” Matsui said. “I hope something can be worked out.”

Matsui batted .615 for the Series, going 8-for-13 with eight runs batted in, including two prior solo homers in the series. Andy Pettitte won his record 18th playoff game and second of the series, the 37-year-old southpaw having also taken a game-three victory. He had looked at retirement but signed a one-year deal to rejoin the Yankees.

“This is what I came back for,” Pettitte said. “I wanted to come back and play in this ballpark. I knew this feeling was going to be something special.”

The Yankees won the crown in their first season in a new $1.5 billion ballpark, just as in 1923 they claimed their first-ever Series crown in the debut year of the now-closed original Yankee Stadium across the street. New York became the first World Series champion since Minnesota in 2001 to use only a three-man starting rotation of pitchers, including 2008 free agent signees Pettitte, C.C. Sabathia and A.J. Burnett.

Yankee slugger Alex Rodriguez, whose season began with a February admission of taking steroids from 2001 through 2003, finally claimed a title after 15 years of failure.

“I couldn’t be more proud of these guys. Now we’re standing here as world champions,” Rodriguez said. “We’re going to enjoy it and we’re going to party.”

New York brought in closing relief ace Mariano Rivera to secure the final five outs and the 39-year-old Panamanian right-hander did his job to touch off a wild celebration.

“A rush goes through your whole body when you know it’s over,” Rivera said. “I was thinking about retirement but I think I’m going to stay around for another five years.”

The defending champion Phillies failed in their repeat quest. No National League champion has taken back-to-back titles since 1976.

“That just makes us more determined to come back next year,” said Phillies manager Charlie Manuel.

Matsui had been relegated to a pinch-hitter role in the past three games, played in Philadelphia under National League rules where pitchers bat for themselves. But he made up for lost time in game six.

After Rodriguez walked to open the second inning, Matsui smashed a full-count pitch off Phillies starter Pedro Martinez high into the cold night air and it soared into the right-field stands to give the Yankees a 2-0 lead. AFP