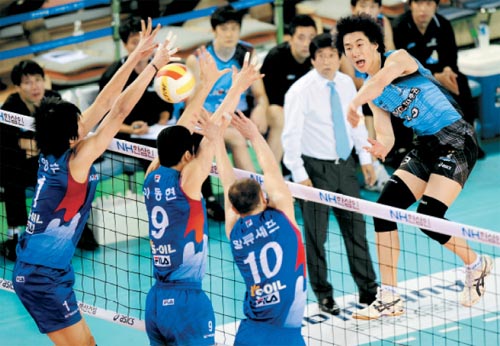 Park Chul-woo of Hyundai Capital spikes the ball past Korean Air defenders during a match on Tuesday in Cheonan, South Chungcheong. [NEWSIS]

Despite all the negativity surrounding Hyundai Capital and its star player Park Chul-woo in the offseason, the team is off to a positive start so far this year.

Make no mistake: The Hyundai Capital Skywalkers are projected to finish near the top of the standings in the Korean Volleyball Federation. But they started the season surrounded by a swirl of negative energy and a host of concerns and questions.

Injuries knocked out key players Lim Si-hyung and Song In-seok. And, perhaps more importantly, the offseason incident at the National Training Center in Taeneung, northern Seoul involving head coach Kim Ho-chul and Park seemed to cast the darkest cloud over the club. After a national team practice in late September, Park was beaten by one of the assistant coaches. With bruises on his cheek and abdomen, Park held a press conference to reveal to the public what happened. Kim, as the national team’s coach, came under heavy scrutiny for the manner in which he handled the case, and the incident strained his relationship with the team’s star player. Many people in volleyball circles figured that the rift between the two would create major problems for the Hyundai Capital squad this season. Park missed the Asian Men’s Volleyball Championships as he recuperated from the physical and psychological damage from the beating.

At media day, where KOVO head coaches gathered to speak to journalists, Kim explained he was doing his part to make amends with his players but also said he thought Park would need some time to recover to his old playing form.

“I smoothed things over with Park over a few drinks,” Kim said at the time. “Park is suffering from back pain so I plan on playing him sparingly in the early goings of the season.”

In the season opener, Hyundai Capital lost to Samsung Fire & Marine Insurance Bluefangs by three sets to one.

Kim responded by playing Park starting in the first set in the Tuesday match against the Korean Air Jumbos. Park put up 29 spikes and six blocks to register a game-high 36 points. In the fifth and deciding set, Hyundai Capital was trailing 14-11 before overcoming the deficit to win 17-15, fueled by a key block from Park.

“When it comes down to it, Park is our team’s ace,” Kim said. “There is no problem between us.”