One thought remains constant on the mind of accomplished ceramist Yoo Gwang-yeol. He wonders how he can make Goryeo period (928-1392) celadon more accessible to the general public, in Korea and around the world.

The master craftsman, who is considered one of the best in the production of the traditional Korean art form, thinks he has finally found a way for art enthusiasts around the world to enjoy it.

He has created a project that connects the beauty of celadon with the modern world via a collaboration with well-known Italian designer and architect Alessandro Mendini.

The project was initiated by Yoo’s Haegang Goryeo Celadon Research Institute in Icheon, Gyeonggi, and it is the first of its kind. 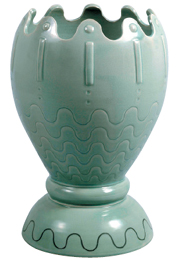 A celadon pot crafted by Yoo based on a design by Mendini.Provided by Haegang Goryeo Celadon Research Institute

Together, Yoo and Mendini worked to recreate vases and other works by the Italian designer in celadon.

“I was a little nervous about meeting Mendini since he is a globally-recognized figure. When I actually met him he had the presence of a great artist but was also unpretentious at the same time. Mendini told me he thought Korean celadon is fantastic and has the most beautiful color in the world. That’s all it took for me to connect with the man.”

But it wasn’t easy. Yoo had to work tirelessly, beads of sweat dripping down his forehead, in front of the kiln for a few months. He spent countless nights breaking the celadon pieces he did not like and would start again from scratch until he produced a finished product he was sure Mendini would like.

“I approached the project with the idea that we needed to get a clear sense of what Europeans like,” explained Yoo. “Celadon contains natural, primitive colors and is full of texture. If Mendini approves, we can proceed.”

The artistry of crafting celadon runs in the Yoo family. Yoo’s father Haegang Yoo Geung-hyung, who passed away in 1993 at the age of 99, devoted his life to recreating celadon and Yoo has done the same. His son, Yoo Jae-hyung, who participated in the latest project, is the next in line. Having completed his studies abroad in the United States, the younger Yoo is in charge of the administrative duties required to reach out to foreign markets.

“I want to entrust my son, Tae-hyun, with the responsibility of producing celadon someday,” said Jae-hyung.


The Celadon Redesign and Revival Project will run Nov. 10-29 at the Hangaram Design Museum at the Seoul Arts Center in southern Seoul. For more information, call (02) 580-1301 or visit www.sac.or.kr/eng/index.jsp.