Primates to come out and play this winter

Primates to come out and play this winter 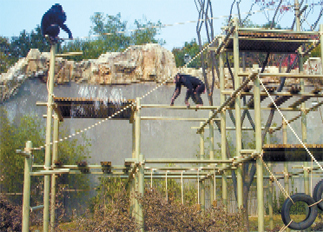 Zoos aren’t exactly the best places to visit in the winter months, as most of the animals stay indoors to escape the frigid weather.

But this winter will be a bit different at the Seoul Zoo in Gwacheon, Gyeonggi - at least when it comes to the apes. Visitors will be able to see chimpanzees, orangutans and gorillas outside even on cold days thanks to newly remodeled, open-air cages equipped with heating systems.

The cages were renovated to more-closely replicate the primates’ original habitats and create a more nature-friendly home.

Instead of steel bars, a large trench separates the animals from visitors, giving the attraction a more natural feel. At the same time, grass and dirt replace concrete floors.

The cages are part of a new habitat called “Ape Jungle,” built to celebrate the 100th anniversary of the Seoul Zoo. The attraction opened last Sunday after 10 months of renovation and construction.

“The Seoul Zoo moved to its current site in 1984 from what is now Changgyeong Palace, and the ape cages haven’t been upgraded since then,” said Kim Hyo-joon, an employee of the zoo. “They were in the poorest condition of all the cages.”

Ape Jungle covers 4,877 square meters (1.2 acres) - which is 4.5 times larger than the previous area - and houses 77 primates including six orangutans, two lowland gorillas, four chimpanzees and 14 Anubis baboons. There are 11 species in all.

Ape Jungle is also pleasing to the eye and was designed with the principles of animal ecology in mind.

At the entrance, visitors pass a huge gorilla sculpture, providing a perfect place for pictures.

They then encounter Anubis baboons that live in an area featuring African-style huts, which allow them to take shelter in bad weather.

Another impressive attraction is the cage for orangutans. As these primates scarcely come down to the ground, the cage includes a playhouse in the trees with sagging ropes that allow the orangutans to move around. The habitat has a heater so that the orangutans can stay warm during the winter, and visitors can view the action in the trees from a raised observation area.

For chimpanzees, an eight-meter-high (26 feet) jungle gym was built with wood, ropes and tires. Visitors can watch the apes hanging around or moving from one bar to the next with their long arms. Next year, the zoo plans to build a taller tower in the cage. The tower will be the largest of its kind in the world at a zoo.

As for the gorillas, which tend to be shy, the zoo built a cave-like shelter with bamboo trees to protect their privacy. There’s also a large structure that resembles a decayed tree stump where the animals can hide. The stump is equipped with wires that heat up, warming the air so that the apes can escape chilly weather.

Next year, the zoo will build a twin tower for lowland gorillas, which like to climb.