Fishing for moments of peace

Fishing for moments of peace 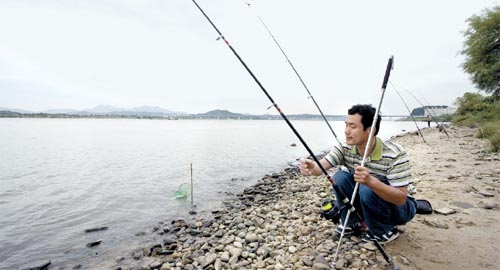 Lee Chae-yeon checks the line on one of his fishing rods at the Han River Citizen’s Park in the Gangseo District. [JoongAng Ilbo]

Lee Chae-yeon is like a lot of men his age. He is most content and at peace with himself when he’s fishing. And on this particular day, Lee is fishing along the Han River in Gangseo District, near his home. While at first there appears to be nothing unusual about the scene, there are the small details that make it different - the cane resting on the pebbles nearby and the fact that Lee’s eyes are closed.

“Whenever I feel bogged down and feel the need to get away from my everyday worries, I pack my fishing gear and head out the door,” said Lee. “Sometimes I take my son, who is in elementary school, and we stay up all night.”

Lee first got hooked on fishing in 1990. He followed a few friends to a reservoir in South Chungcheong and was pleasantly surprised when a sizable fish took the bait. The feeling of having a catch tugging at the rod, sending vibrations up his forearms, got him hooked for good. The unforgettable feeling led Lee to stake out new places to fish. Whenever he had the chance, or, more accurately, whenever he had the money, he bought new equipment for his newfound leisure activity. He now has five fishing rods and looks like a natural as he’s baiting his hook and tossing out the line. It’s hard to believe that he is blind.

While Lee’s story might come as bit of a surprise to some, there are many people like him who enjoy fishing. Most join a fishing club catering to people with disabilities, which are available in all regions of the country. One such organization even organizes an annual fishing contest, where the country’s best visually impaired fishermen compete for the title of best fisherman in the country.

According to the Korea Blind Sport Association, 22,000 people are registered with the association, 18,000 of whom are visually impaired, meaning they have partial vision and can find their way around. This perhaps explains why the KBSA is one of the most active among organizations for people with disabilities. The KBSA has organized a total of 26 sports tournaments in this year alone.

People with Lee’s disability stick strictly to reel fishing. That’s because it is not possible for Lee to see floats bobbing up and down. Instead, he uses his heightened sense of hearing to aid him. He casts the line with all his might and then waits for the sound from the bells attached to his rod. With the sound of the bell, Lee is able to differentiate which rod the sound is coming from, how big the fish is or a whether a breeze has jingled the bell. Still, Lee faces several disadvantages because he cannot see.

“I cannot travel alone. I always need a guide for safety, or it can lead to an accident. I usually go fishing with a few of my friends who like to fish,” explained Lee. “To be honest, that’s the reason I began fishing with my son. I wanted to fish but it was hard to match my friends’ schedules, so I began convincing my son to tag along. Fortunately, he likes to fish and he’s often the first to ask me if we’re going fishing. He holds my hand and leads the way.”

Lee lives in Banghwa-dong, western Seoul, and his home is a 15-minute walk from the Banghwa Bridge. One of his favorite spots is there, near the end of Han River Citizen’s Park in Gangseo District, where eels and mullets make their way up the river. Another favored destination for Lee and other anglers is on the right-hand side of the Olympic Expressway toward Gimpo International Airport.

Lee makes his way to one of these two spots whenever he is troubled with worry. What worries him, you ask?

“I usually worry about how to get by. It’s not easy for me to make a living,” he sighed. “But when I am sitting on the riverbank with my fishing rods in the water, I’m able to forget about my troubles, even if it just for a brief moment. That’s what keeps me coming back.”

In some ways, Lee is a casualty of his environment. His eyes were injured in a fire back in 1984. Although his eyesight could have been saved, he did not have enough money for the treatment.

After a period of soul searching, he attended a school for the visually impaired and got trained as a masseur.

What makes life difficult for Lee is that he takes home a meager salary of 800,000 won ($676) per month. Although it’s not much, his stable monthly income makes him ineligible for welfare or financial support from the government. But he has learned to make do in order to take care his family of four.

Lee always releases his catches. When asked why, Lee replied with a hearty laugh: “I didn’t come here to catch fish.”

To Lee, it doesn’t matter if he reels one in or not. He is most content when he’s casting a line.