Oft-overlooked key to baseball: the translator

Oft-overlooked key to baseball: the translator 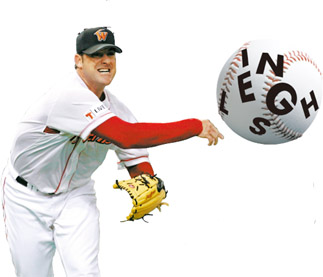 It’s late in the second game of the Korean Series, and the faces of the players and coaches in the visiting dugout speak volumes.

The SK Wyverns are down 2-1 on the road to the Kia Tigers, who finished the season with the best record in baseball. As the ninth inning approaches, the Wyverns are an anxious and nervous bunch, as they now face the prospect of heading back home to Incheon down two games to none. In the dugout, pitching coach Hajime Kato - a former Yomiuri Giants pitcher - turns to starting pitcher Gary Glover to check on his status for game three in two days.

There is an obvious communication barrier between the two: They can relay simple messages to each other, but they need the help of a team interpreter to ensure accuracy and eliminate misunderstandings. Kato speaks to the team interpreter in Japanese, and the information is then relayed to Glover in English. Glover finally states that he is “ready to pitch in game three,” which is then translated into Japanese for Kato.

The middleman in this exchange is Kim Hyun-soo, a 38-year-old interpreter who can speak English, Korean and passable Japanese. To many baseball fans, the man in the white-and-red SK Wyverns track jacket has become quite a familiar sight in recent years, as he can often be seen jogging out to the mound in the crucial moments of games.

When it comes to baseball, star pitchers, power hitters and crafty coaches get all the headlines.

But there’s another individual who plays an important - though decidedly less publicized - role: the translator. In a league that is increasingly attracting foreign players from both the United States and Japan, communication between players and coaches who speak different languages is becoming a bigger part of the recipe for success. It also can be a key reason behind failure, as the situation is ripe for miscommunication and confusion.


Crucial to the game

The process Kato used to communicate with Glover in the recent Korean Series game might seem a bit complicated. But it’s a vast improvement from 2007, when American pitcher Michael Romano was with the team. When Kato and catcher Park Kyung-oan wanted to talk to Romano during a game, they needed to bring both Kim and a Japanese translator along.

Now, they rely solely on Kim, who communicates with Kato prior to going to the mound. 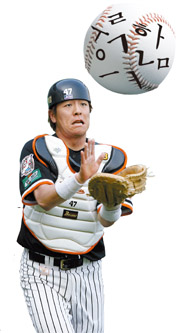 It’s a crucial part of the game.

While employees of companies communicate with each other through e-mails, faxes and phone calls, baseball players and coaches use creative hand signs and signals (an average of 300 of them during a single game) to get their messages across. These signals are used to communicate everything from what the next pitch will be - such as a fastball or a slider - to whether a player should attempt to steal a base while the game is in progress.

Often, however, coaches and catchers need to talk with the pitchers on the mound. They are allowed to do so, but here’s where it get tricky: They only get 30 seconds. That’s where interpreters, the only team members without a uniform who can visit the mound, come in.

When such a meeting involves people who speak different languages, it obviously can be difficult to communicate in such a short period of time, let alone make difficult strategic decisions such as whether or not a pitcher should remain in the game or step down and make way for a reliever.

Pitchers are a proud bunch, and in most cases they will insist that they are capable of going a few more innings. When a language barrier is not an issue and the pitching staff has a good rapport with the coaches, an agreement can be reached without much fuss. If the interaction involves two or more nationalities, well, you can see how things might get complicated. This especially rings true in situations that involve a Japanese coach and an American pitcher.

“Japanese people by nature are skeptical and constantly worry, which more or less is an effort to prevent negative results,” Kato said. “Americans tend to be optimistic. They think about the possibility of success more than failure.”

To explain it in simpler terms, the two sides have different mind-sets and therefore must work together to reach a common goal of winning. Interpreters serve as the bridge that connects them.

Most interpreters in the Korea Baseball Organization do not have formal training in their field. In fact, none of the translators (each team has an average of two) working in the league now majored in a foreign language.

Kim Hyun-soo - who joined the Wyverns in 2000 as the team’s English interpreter and is the longest-serving translator in the eight-team KBO - majored in aeronautical engineering at an Australian university.

He was hired by Asiana Airlines and was in the process of completing his pilot training program when he learned that SK was looking for a translator. Back then, KBO teams had used part-time interpreters to fill their needs. Having played baseball while in college, he applied for the position and was hired as a full-time employee of the SK Wyverns.

Lee In-young of the Hanwha Eagles graduated from Hankuk Univeristy of Foreign Studies with a degree in business administration in 2005. He was hired by a financial company in Hong Kong but came across an ad posted by the Eagles. Having been a die-hard fan of the team all his life, Lee applied for the position without a moment of hesitation.

Despite the lack of formal experience needed, the job has its fair share of challenges. For one, interpreters must gain the trust of the team quickly and strive to develop solid relationships from the outset.

“It is impossible to get important messages across in 30 seconds,” Kim said. “Therefore, it is important to earn the respect of players and coaches and to get to know them on a personal basis.”

And only part of the actual job involves translating words from one language to another. Interpreters often find themselves catering to the needs of players from different backgrounds or with difficult personalities. Kim, for instance, described being dumbfounded when a pitcher who had just been tagged for several runs stepped down from the mound and said to him, “I’m starving, can you make a reservation at a restaurant so that I can have a steak dinner as soon as the game is over?” 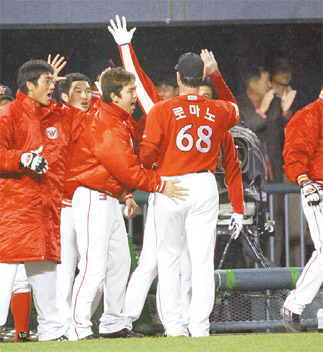 SK players congratulate Romano with a pat on his behind after the starting pitcher gets out of a fifth-inning jam in game three of the 2007 Korean Series against Doosan. Some players from overseas have had a hard time understanding such cultural characteristics. By Lim Hyun-dong

Then there is the tough job of explaining cultural differences.

It’s natural, for example, for a Korean catcher to tap a pitcher on his behind to congratulate him or encourage him if he’s struggling, similar to how players in American football behave. It’s supposed to be a sign of affection and is an accepted part of Korean sports. However, Kim said that it upset and concerned one American ballplayer, whom he declined to name, for days.

Some difficulties crop up when Koreans from different upbringings are involved. Kim experienced problems in this area several years ago with SK Manager Kim Sung-geun, a Japanese-Korean who was raised in Japan but played professional baseball in Korea.

“When [the manager] was hired in 2007, it was difficult to approach him,” the translator said. “Since I did not feel comfortable speaking freely to the manager, the players I was helping eventually behaved the same way. Due to the lack of fluid communication, a problem eventually arose.”

SK’s manager is widely respected around the league as possessing one of the brightest minds in baseball, but he is also known for his impatience with pitchers. Romano became frustrated at the manager’s tendency to pull the trigger on pitching changes on short notice. It got to the point where Romano’s facial expression visibly changed when Kim began to approach the mound. Romano’s frustrations finally blew up in a June 6, 2007, game against the LG Twins. The Wyverns were hit with a run early in the game, and manager Kim Sung-geun made a pitching change. 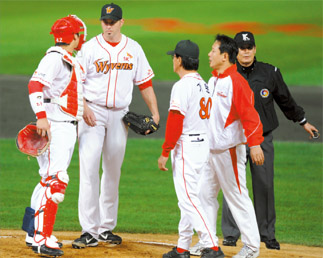 SK Wyverns pitching coach Hajime Kato and interpreter Kim Hyun-soo check on starting pitcher Gary Glover during game one of the second round of the playoffs against the Doosan Bears on Oct. 7. By Kim Jin-kyung

Realizing he could not get his point across to pitching coach Kato, Romano stepped down from the mound and did something deemed unthinkable in Korean baseball: The American pitcher, clearly bothered by the decision, approached his manager, screaming.

Shocked at what was unfolding in front of his eyes, Kim Hyun-soo threw himself between the angered pitcher and the bewildered manager in an attempt to defuse the situation. Romano was sent down to the Wyverns minor league affiliate the very next day.

“I was worried,” the interpreter said. “In Asian culture, the relationship between the coaching staff and the players can be described as vertical, with the manager at the top of the totem pole. Kim [the manager] had lived his entire life that way, including in Japan. But people born and raised in America, like Romano, tend to approach relationships in a parallel manner. It is my job to narrow such gaps.”

KBO teams can’t afford to take the interpreter role lightly, as they invest heavily in foreign players to give them an edge. Communication difficulties can therefore damage the value of that investment.

And it seems that many teams have found this investment worth every won. The KIA Tigers benefitted from the strong play of foreign pitchers Aquilino Lopez and Rick Guttormson, who helped the team take the regular-season title and score a trip to the Korean Series for the first time in 12 years. Most top-tier teams in the KBO are in similar situations. In contrast, teams with players from abroad who do not fit in with their plans or get injured often struggle.

The interpreter has the important job of holding everything together.