Walkin’ in a water wonderland

Walkin’ in a water wonderland 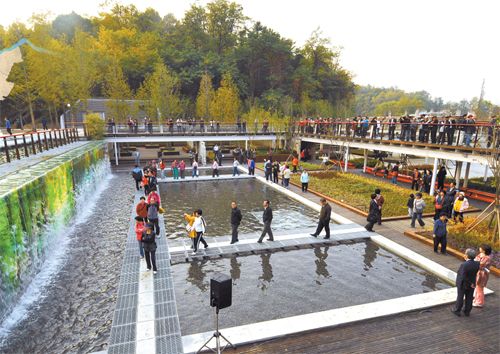 Visitors walk around Mondrian Garden in West Seoul Lake Park in the southwestern part of the city. On the left is the Media Wall Stream, which features digital art displayed on a light-emitting diode (LED) screen. [YONHAP]

Forget flowers. At West Seoul Lake Park, fountains, ponds and even digital art behind a cascade of water steal the show.

The new outdoor park, which opened to the public last week, heavily incorporates water to draw visitors, integrating creeks, shallow pools, waterfalls and a huge, man-made lake with the local landscape and environment. 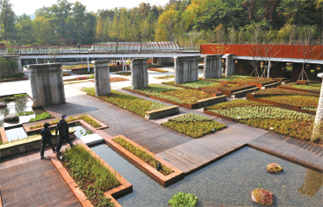 Mondrian Garden was built on deposition tanks, and some of the old water purification facility’s walls remain. [NEWSIS]

The result? A visually engaging ecological beauty with a peaceful atmosphere, where still ponds bring a sense of serenity and gently flowing water bring some life to the scene. And for those who still want their flowers, you can see plenty of them here, too.

Like Seonyudo Park on the Han River, West Seoul Lake Park was built on the site of an old water purification facility. Covering 225,368 square meters (55.7 acres), the 21 billion won ($18 million) park in Sinwol-dong, Yangcheon District includes a large lake and a sunken garden built on deposition tanks. Some of the walls, columns and overpasses of the old water purification facility still stand, adding a unique element to the park.

This is the first time in 50 years that the area has been open to the public, as the original purification facility was built in 1959. After the plant closed in October 2003, the Seoul city government hoped to convert the facility so it could be used for another purpose. But it quickly became clear that the plant was too old and its capacity too small for any other viable use, so officials concluded that the place was not worthy of renovation.

Instead, they decided to turn the site into a park, something that southwestern Seoul sorely lacks. It’s been a big hit so far, attracting thousands of visitors daily since opening its doors.

Upon entering the park, visitors are greeted by a large man-made lake, which was part of the original water facility. Aquatic plants line the edge of the water to make it look more natural. But this isn’t just any lake, for it contains a fountain that automatically activates when the noise level exceeds 81 decibels. The sound of the water shooting from the fountain helps offset the noise of airplanes flying overhead, a common occurrence because of the location near Gimpo International Airport. Visitors can take a leisurely stroll on a path that circles the lake or sit down and relax on one of the large wooden decks shaped like oversized stairs that look out onto the water.

The park’s biggest attraction, however, is Mondrian Garden. The garden is named after Dutch painter Piet Mondrian, as its rectangular flower beds and ponds resemble those found in the artist’s works. Many people choose to walk on the overpasses and look down on the flower beds and ponds below. Exposed concrete walls and rusted steel walls and pillars are reminders of the site’s previous life, but they fit in perfectly with the solemn atmosphere.

“I tried to preserve the facility’s historical meaning and revive the ecology of the place as much as possible,” said David Choi, a professor at Yeungnam University, who designed the park.

Another unique attraction is the pond made with transparent materials that lies on the same level as the overpasses. Underneath there are some benches, where visitors can sit and look above them to see the pond - and lotus plants growing in it - from the bottom.

At the Media Wall Stream, visitors can check out digital art on large light-emitting diode (LED) screens located behind a wall of cascading water and set to music.

The park is somewhat small, particularly when compared to others in Seoul. That has caught some visitors by surprise.

“It still feels a little empty,” said a Bucheon resident who identified himself only by his last name, Shin. “It will take time before the nature fully takes over this place.” 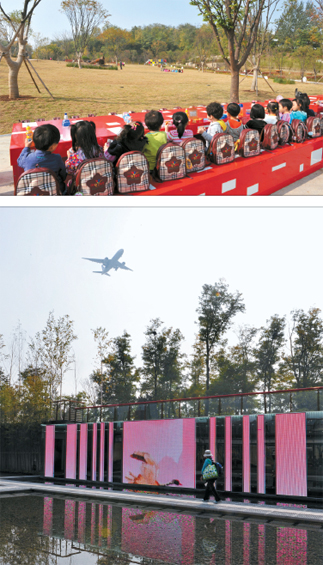 Top: Children sit at the “100 Person Table,” which is made of red blocks. above: A woman walks by the Media Wall Stream. [NEWSIS]

But Baek Jong-nam, who lives in Sinwol-dong, said it’s a step in the right direction.

“It is not a huge place but it is well designed,” said Baek, who recently visited the park with his wife and child for the second time since it opened. “There are few parks like this in Yangcheon District.”

Children likely won’t think twice about its size. The park features a jungle gym made of see-through plastic cubes stacked on top of each other with slides inside. There’s also a “100 Person Table” made up of large rectangular blocs arranged to resemble (what else?) a giant table and chairs.