Film on the fly in 48 Hour Film Project

Film on the fly in 48 Hour Film Project 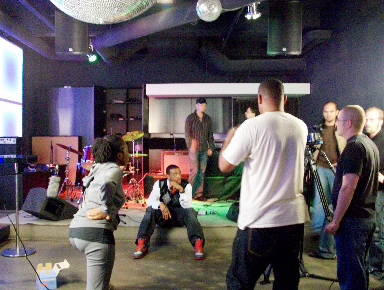 Danica Moore, left, and James Williams, fourth from right, direct their actors in their short film “Forever Ever,” which they shot for the 48 Hour Film Project in Seoul. By Andrew Siddons

While Liana George was studying filmmaking at New York University a few years ago, she was no stranger to short films.

“I would be planning it probably two months ahead of time ... booking locations, and trying out the actors, writing the script, that sort of thing. And once production starts, I would probably be filming that for two or three days. And then the editing would probably take a week to finish,” she said.

So what happens when you have to squeeze all of that - writing, shooting, scoring and editing a film - into a single weekend?

That’s the idea behind the 48 Hour Film Project, which has been taking place worldwide over the course of weekends since earlier this year, and finally reached Korea two weeks ago. It’s the first time the event has been held here, and this weekend, the films shot in and around Seoul will be screened and judged by a panel of Korean film industry types. The film selected as the best could go on to be screened at the Cannes International Film Festival next year.

The Seoul project kicked off Friday evening, Oct. 23, when teams met at the Film Forum in Sinchon to receive their instructions. The genres of their films were assigned by random selection: there were safe bets like drama, romance, or a buddy film, and then there were the likes of superhero, mockumentary, and the perhaps daunting “musical or western.”

To prevent cheating, each film would also be required to have a certain character, a certain prop, and a certain line of dialogue. The Seoul films needed to have a character named “Jay Park,” who would be a “real estate professional.” There needed to be eyeglasses. And someone would have to speak the line “I don’t believe you.”

Danica Moore had gathered members of her cast and crew at a Haebangchon apartment to plot the next two days. They had rented their equipment, found some willing crew members, and a pair of bars in Itaewon had agreed to serve as locations if needed. They had secured a handful of actors who had yet to know even the very nature of their roles. Some crew members would even end up on the other side of the camera. “My PA, who was actually one of my students, he ended up being the brother [of the aforementioned Jay Park],” said Moore, an English teacher from the U.S. “The only definite that we had was that I would be a lead,” she said.

They also cast a potential male lead who happened to be in a band, so that they could use his music for the soundtrack. All they needed was a script for their film - a ghost movie.

The next day, they were a tired-looking group of people waiting for an Itaewon bar to open. Outside of The Hive, the film’s crew members talked with members of the band performing in the scene, while the cast rehearsed their lines. Edwin Davidson was another production assistant, one of a few on hand to go do, well, just about whatever was needed of them: buy some snacks, some Scotch tape, make sure that release forms were signed. And act, if need be. “I have a line,” Davidson said. “I think.”

The bar’s owner finally let them in about an hour after they had planned. But when you’ve only got 48 hours, each one really counts, and even a minor setback can be a big problem.

By the time the editing began, the production delays here and there had added up. When Moore and her team realized that they wouldn’t make the deadline, they realized their hard work had still meant something; just something unexpected.

“We can screen it ourselves. Which means that we would own the product. And we could submit it to other festivals,” Moore said.

So while attendees won’t be able to catch Moore’s ghost movie “Forever Ever” at the Film Forum this weekend, there will still be 13 other shorts screened, including the film that George’s team produced, a psychological horror called “Loom,” and on the lighter side, a film about shopping mall Santas trying to make sense of their profession in “Santa Support Group.”

The shorts will be screened on Saturday night at 9 p.m, and Sunday at 7 p.m. at the Film Forum, which is located in the basement of the Hanuisol Building, across the street from the rear gate of Ewha Womans University, northeast of the Yonsei Severance Hospital. It is accessible by various bus routes.