On the one hand, and on the other

On the one hand, and on the other 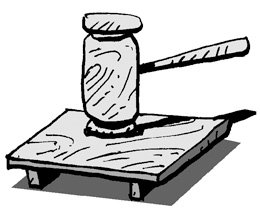 The courts ended the so-called “Washing Place” fight on Wednesday. They found the defendant, an art magazine, not guilty of defamation under the justification that “there was sufficient reason to present suspicions” of forgery. Considering the possibility of the artwork being genuine, it also acknowledged the plaintiff, an artwork auction company. It was an exquisite case of acknowledging both sides.

There was a historical ruling that did the same in the United States - Marbury v. Madison, decided by Chief Justice John Marshall (1755-1835).

President John Adams failed to get re-elected in February 1801 but continued efforts to influence the judiciary until his last days in office. On March 2, he appointed Federalist circuit judges and justices, and the appointments quickly went through, receiving agreement from the Senate, signatures from the president and authorization from the secretary of state just before midnight, March 3.

However, the commissions failed to be delivered to those appointed before daybreak. The term of the new president, Thomas Jefferson, had started. President Jefferson asked the new secretary of state, James Madison, to withdraw the appointments for judges who had not yet received their commissions.

The judges who had been sidelined, including William Marbury, filed a lawsuit against the secretary of state.

Chief Justice Marshall held up the hand of the plaintiff, saying, “The commissions must be relayed according to the law because the appointments have already been completed.” However, he then raised the hand of the defendant, saying, “The law that supports delivery of commissions is unconstitutional.” It was the first time the concept of judicial review had been established in U.S. history.

There is another moving story in which a public official acknowledged both sides. It surrounds Fiorello La Guardia, who was elected mayor of New York three times in a row and held the office from 1934 to 1945. He fined a senior citizen $10 for stealing bread for his starving grandson. He then fined himself $10 and the audience in the court 50 cents each for “leaving the city in a state where senior citizens have to steal bread.” The old man left the court with $47.50.

Stories about people who acknowledge both sides can become famous judgments or start debates. The political world is still talking about the judgment of the constitutional court on the media law: “The process is partially unconstitutional, but the law is valid.” It is an aftereffect of acknowledging both sides.

Farsighted policy-making and a promise to the public have come into strong conflict in the recent Sejong City problem. Both sides have justification. However, I have a feeling it will be difficult for both sides to get acknowledged.